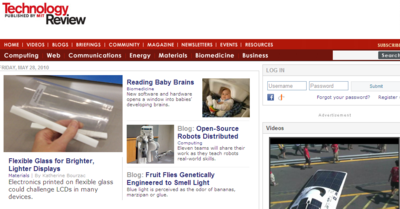 MY REVIEW: This blog is much more technology oriented than science oriented, so it makes a valuable adjunct to the other blogs like Wired Science or Pop Sci and so on.

The subscription is $1.99 a month, but there are multiple posts a day. If you're in to technology, it's worth it.

Fruit Flies Genetically Engineered to Smell Light
Blue light is perceived as the odor of bananas, marzipan or glue.
By Emily Singer

In this petri dish irradiated with blue light, normal larvae avoid areas exposed to light. Modified larvae (seen here as white shapes on the illuminated surface) perceive the light as a pleasant odor, and they move towards it. Credit: Ruhr-Universitaet-Bochum

Researchers in Germany have genetically engineered larvae of the Drosophila fruit fly so that the insects smell blue light. They say the findings will shed new light on the flies' olfactory system.

Scientists spliced the gene for a light-activated protein into cells in the olfactory system that normally respond to different odors. When hit with light, the cells send a signal just as if they had sensed the odor. The exact smell the animal perceives depends on the cells that are activated. Researchers were able to make the flies smell both pleasant and unpleasant odors. While normal animals normally avoid light, the genetically engineered flies flocked to it if they perceived a pleasant smell, such as the odors of banana, marzipan or glue, which are all present in rotting fruit. The research was published in Frontiers in Neuroscience Behavior.

According to a press release from the Ruhr-Universitaet-Bochum, the researchers now plan to use the same principle to undertake further studies on adult flies, equipping them with photo-activated proteins to trigger isolated cerebral neurons.