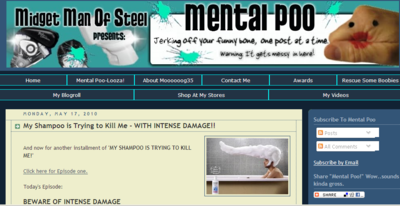 MY RECOMMENDATION: Yes, with reservations

BLOG DESCRIPTION: The stuff my mouth wants to say but the laws of public decency won't let me.

MY REVIEW: This blog gets a "Yes" because it translates well to the Kindle, and a "with reservations" because I really don't care for the humor. It goes way beyond potty humor to locker room humor. If this is your thing, then this is your Blog. The Blogger covers a wide range of topics with foul language, which goes with the territory. His social commentary runs the gamut and I'll leave that up to your imagination.

From making fun of Walmart ads, to trying to interpret parent notes to teachers (his wife is the teacher), to discussing "THE" conversation with his 5 year old, to bar pictures of his friends and other totally random things - you just never know. But I can tell you three things: they will be blatantly honest, most likely a little bawdy, and usually not in good taste. However, some people would call this entertainment. (And, he posts quite often!)

After all, it takes all kinds and one man's decency doesn't always translate.

Before I start today:

There wasn't a lot going on here this week because I was in Delaware at a Celebrity Golf Tournament raising money for Autism Research.

It was an exhausting 48 hours of being surrounded by Whiskey Girls, celebrities, and Philadelphia Eagles cheerleaders.

But I roughed it.

That's what she said.

I have some pictures from it up on my Facebook Page but taken by my camera phone because I somehow LOST MY CAMERA IN THE HOUSE (?!) before I left.

Also...I was a recipient of a "2010 Funniest Blogger Award" from over at Ed's Funny Pages:


Sadly, this is not the first time I received a golden penis.

And that's all I'm going to say about that.

Many thanks to Ed.

Now go read him after you read this.

Just in case you missed another fun-filled week on Mental Poo...

My Posts from this Week:

I drop my wife's favorite pen in the toilet.

It's called creativity, people. Deal with it.

A year ago this week on 'Mental Poo':

If you have no interest in finding out what a Cleveland Steamer or Rusty Trombone is, DO NOT READ THIS POST.
You've been warned.

The best feeling I've had in a long time, is having Bob held firmly between my fingers.
* cricket

My daughter's school puts on an African dance show.

Two Years Ago this week on 'Mental Poo':

I go to Mississippi for a business trip:

How to spot a chronic masturbator.

Stop. Staring. At me.

Some new shit, some old shit.

That should keep you busy.

See you on Monday.

___________
Ann Currie writes two blogs of her own:
My Life a Bit South of Normal
Silver Pieces: The Strange and Peculiar