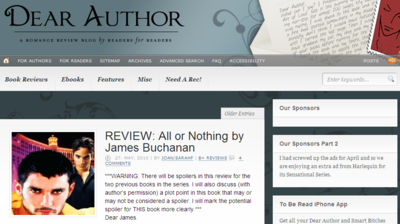 BLOG DESCRIPTION: Dear Author is a blog devoted to the romance genre. Each review is written in the form of a letter to the author. There is also industry news as well as coverage of ebooks and ebook technology.

MY REVIEW: People who enjoy romance books will really enjoy this blog. Plenty of reviews - well written. Other news threads regarding book sellers and authors. Recommended.

This is a difficult review for me to write, because something happens in Fantasy in Death that many will likely regard as insignificant, but which for me changed the series in a fundamental way. Several books ago, Jane noted that Eve did something at the end of Creation in Death that seemed completely out of character for her. Whether blip or character shift, only time would resolve, and for me, with this book, it’s resolved in favor of a frustrating change in Eve’s character. Readers who see Eve as any different or who don’t find the change I see concerning will probably find Fantasy in Death a much more satisfying book than I did. Especially if they are enjoying the stronger mystery/procedural focus the series has recently acquired.

When techno boy wonder Bart Minnock is found dead in his locked holo room, burned, bloody, and alone except for the disk of the new game his up and coming company, U-Play, is readying for sale, the NYPSD and Eve Dallas are stumped. There was no sign of tampering with Bart’s droid, his apartment, or the lock on the holo room, and no record of any visitors since he came home from work the previous day. As soon as the e-team tries to retrieve the game disk from the hard drive, it self-destructs, a safety measure Bart had in place to deter spying and stealing. How could a guy who seemed to have no enemies and whose biggest competition was the man who had generously helped Bart build his business (Roarke) be murdered? How could anyone actually get in that room to murder him?

These mysteries generally run one of two ways: Eve has a suspect in mind from the beginning and spends the book setting him/her/them up, or she is working to narrow down a broad field of suspects before revealing the killer near the end of the book. Fantasy in Death is of the second variety, and it is an effective suspense builder, as the way Bart died is so closely connected to who might have done it. From Bart’s girlfriend to his three partners to game company competitors to the kids in his building who played various games with him, there are numerous people around Bart who could have been responsible, even though it is difficult to imagine anyone wanting a guy like Bart dead. Affable, honest, brilliant, non-threatening, and young, Bart is a rather unlikely murder victim. In fact, was it even murder that took his life?

For the past handful of books, I have been noting a decided shift toward a bigger emphasis on the mystery and police procedural aspects of the series. While Robb has always woven the relationship and mystery elements together, the past few books have featured Roarke and Eve working together on these cases, almost like partner detectives, with Roarke’s own world-domination a footnote at best and any battles between them erupting in the context of the case or over a somewhat mundane issue. I will return in a bit to the main conflict between Eve and Roarke in this book, because it connects to my most substantial problem with Fantasy in Death, but in terms of their personal life more generally, Nadine’s book launch is the primary “life event” featured in this book (and note that the book is launched in print hardcover!), allowing Trina to make her usual terrorizing appearance, Leonardo to design a fab dress for Eve, and the extended gang of friends to dress up and mingle at the launch party. These appearances are becoming routine (Eve feels compelled to say something nice about Mavis’s baby Bella, Peabody gets to dress up and be complimented by Roarke, etc.), although they are reassuring in regard to series continuity.

As for the mystery, I actually guessed the method early on, although it took me a while to catch on to the responsible party. Fantasy in Death felt current to 2010 in its specific focus on gaming and on the changing technologies we are, even now, seeing around us. I have always wanted the more futuristic aspects of the In Death world to be more directly featured in the books (as they were in the beginning), and Fantasy in Death delivers on this a bit more than quite a few of the recent books have. I enjoyed all that quite well, and even though I caught on pretty quickly to what was going on, it was still fun to watch Eve’s brain sift through various suspects and theories. I’ve always found her most compelling when she’s in “cop mode,” and there’s a great deal of that in this book.

Where I had real issues was in the way Eve’s moral compass, the aspect of her that has been so powerfully inflexible since the beginning of the series, has, in my opinion, gone inexplicably wonky (well, I think there is an explanation, but I’ll get to that). I still remember the huge battle Eve and Roarke undertook in Purity in Death over whether “justice” as Eve or Roarke sees is should prevail over the limits of the law and Roarke tells her how “black and white” she is. Or when, later in the book, she makes a deal with a dirty cop who took the law into his own hands to bring down his confederates:

She looked away from him a moment because knowing she’d try for the deal made her sick. The greater good, she told herself. Sometimes justice couldn’t sweep clean.
Or what about Conspiracy in Death when Eve temporarily loses her badge and is literally inconsolable because her respect for the law is so complete and her dedication to enforcing it so fundamental to her identity. How many times in the series has Eve taken a stand to do things the “right” way, from within the letter of the law? Dirty cops have disgusted her, cops who take the law into their own hands have enraged her, and she’s made many hard choices out of respect for the law. Even her use of Roarke’s unregistered equipment has made her feel conflicted, although that lessened once she was able to officially bring Roarke on board to her investigative team. Any mercy she has shown has been carried out within the letter of the law, even if it was at the very edge. So, a few books ago, when Eve stepped out of that moral absolutism in regard to a suspect it was extremely shocking to me. It seemed a very clear and abrupt change of direction for a character whose identity for more than 20 books has been consistent in regard to her respect for the law.

Whether that change was a blip has, in my mind at least, been settled by Fantasy in Death. And my belief now is that Eve has changed, and the change is a function of what I see as the new series focus, namely Eve and Roarke, married detectives. Here Roarke, runs a deep security check on his own employees, because of the close professional connection between his company and Bart Minnock’s (yes, of course Roarke is developing new gaming technologies). Eve objects strenuously to this search, not so much because it violates police procedure but because he does so without telling her and being told by her to do it:

“Any data from your run has to coincide with mine, and officially come from mine whether it clears your whole crew or somebody bobs to the surface.”

“I know how it works, Lieutenant. I’ll just get back to it then, so you can have what you need and shift it back to your side of the line.” . . .

But he should’ve let her do it, or waited until she’d assigned him to do it. And that probably grated. The assign portion. Couldn’t be helped. She was the LT, she was the primary, she gave the damn orders.

Now she was passing aggravated and heading toward pissed, she realized.

She’d just been trying to shield him a little. Wasn’t that her job, too? she thought in disgust as she rose. Part of the marriage deal? So why were they fighting when she’d done her job?
So Roarke’s stepping outside the strict limits of the law is now merely a challenge to Eve’s authority and a frustration of marital responsibilities? While I have always enjoyed the petty struggles Eve and Roarke engage in; I even enjoy the petty aspects of Eve’s character – they help make her human and relatable. But the old Eve, in my opinion, would have been worried that Roarke was himself going to take the law into his own hands, not so much whether she should have assigned the work to Roarke first.

If, indeed, the series is moving more toward Eve and Roarke as a detective team, Roarke has to become more “official,” and thus his often unorthodox methods have to become more “official,” and I wonder if this is why Eve has taken a turn away from her previous stance of the law above all. It makes a certain sense that this would be the case, and certainly, spending two years married to Roarke has challenged many of Eve’s previously unchallenged biases. However, for me, her fundamental respect of the law and its limits has been the most defining aspect of her character, and I fear that is going to be more and more undermined as the series – and Eve and Roarke’s professional partnership – moves forward.

As far as the mystery and procedural aspects of Fantasy in Death are concerned, while I can never read the interrogation scenes without counting the Constitutional violations (and yes, I assume that a society that still has some version of Miranda hasn’t substantially altered the Bill of Rights), I found the book moderately enjoyable. Not the best of the series, nor the worst. Somewhere between feeling engaged and entertained and wishing for a bit more fire and novelty in the series, or between a B- and a C+.

RECENT POSTS:
-- REVIEW: All or Nothing by James Buchanan
--Thursday News Thread: Penguin and Amazon Have Kissed and Made Up
--REVIEW: Vegas Two Step by Liz Talley
--REVIEW: Fantasy in Death by JD Robb
--REVIEW: Seven Secrets of Seduction by Anne Mallory
--The Dear Author Intro Interview with Mingmei Yip
--The Reader Responsibility to Author Direction