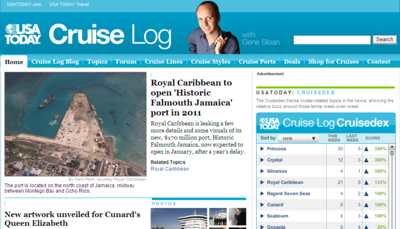 BLOG DESCRIPTION: USA TODAY's Gene Sloan reports on the latest news and trends in the world of [passenger ship] cruising.

MY REVIEW: I need to win the lottery before I can afford to take a cruise, but it's a dream of mine and so it's kind of fun to keep up with passenger ship cruise news, and make lists of places I'll go should I ever get the discretionary funds to do so.

So this blog, maintained by folks at the newspaper USA Today, is pretty fun. And for those individuals who can afford to go on cruises, you will definitely enjoy this blog.

He says the port will be done up in classic Georgian style and predicts passengers arriving there "will feel like they are in the old world of the Caribbean and find themselves availed of numerous shopping and authentic dining opportunities."

Royal Caribbean has been working for three years in collaboration with the Port Authority of Jamaica to create the new cruise destination, located on the North coast of Jamaica midway between Montego Bay and Ocho Rios.

The 5,400-passenger Oasis of the Seas and Allure of the Seas will begin calling there in March, but the port will begin to take ships the first of the year, beginning with the Navigator of the Seas, Milan says.

"Originally we had planned to open this port at the same time as Oasis arrived into Port Everglades but as is often the case with really big projects, it has taken somewhat longer than we originally anticipated. But we are no less excited by the prospect for the development," he says.

The project was designed by thematic designer Idea Group of Orlando, and Milan says it recreates the character of the 1769 town, once the original port of Jamaica. Falmouth was also where many slaves were brought to the New World and, for a time, the world's leading exporter for sugar and rum, Milan says. He adds that Royal Caribbean expects the new port to have a profound impact on the town of Falmouth, in a good way.

"As the phases of the port are implemented the new state-of-the-art port will blend into the old town. It is anticipated that the remaining designated historic buildings in the community will gradually be restored."

Milan says passengers arriving in Falmouth will be able to book shore excursion options in both Ocho Rios and Montego Bay, and will also find options if they choose to hangout in Falmouth.

"Historic Falmouth will blend well into the local town and will seamlessly allow our guests to experience one of the true treasures of Jamaica." --Fran Golden