The United States of Motherhood (parenting) 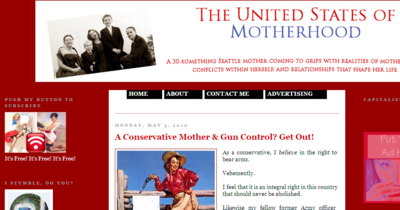 Red Head. Writer. Wife & Mother of Three. This is my kitchen drawer of thoughts. Jumbled. Insane. Full of treasures...and junk. Deal with it. Boldly going where most women dare not to mention. This Seattle swim mother, former PTA president, former US Army Lieutenant, Berkeley grad, dog pamperer, coffee addict and now screwy, stay at home mom who loves her red wine is one windy motha full of inanities.

Oh, yes, my friends, SHE DID GO THERE.

*** WARNING to my FAMILY, FRIENDS, & NEIGHBORS: Enter at your own risk. You make not like what you read.***

MY REVIEW: I recommend this blog. Well written, in a personal style. Posts regularly, with each post full of content.

(I don't reproduce the photos, which show the chef in question strutting her stuff, much like Danica Patrick (at least the chef isn't tweaking the lesbian button that apparently guys so love to see). Then of course there was Heidi on Tim Allen's Tool Time, she of the shorts up to her butt. And was Dukes of Hazzard - the series - be as popular without Daisy of the cleavage and the short shorts?)
Giada Rhymes with Giardia: Both are Dirty

Guess what my husband's afternoon plans were? What? Take the kids to swimming after a rough, emotional draining week for me you say?

He plans to stand in line at his hated Costco to see this tomato slut in Issaquah:

She is an embarassment to the chef profession. If this is the only way you can sell cookbooks, you aren't far from the oldest profession in the world. Besides, can we say airbrushed to the extreme??

My husband also has a thing for Rachel Ray. In my search to show him how dirty Giardia is which I am sure he already knew, we came across these:

How pathetic. Now I know why he has had a thing for Rachel in years. I thought he was over it when he tweeted this recently:

Do you see Tom Colicchio, or Wolgang Puck, or even hot little Jamie Oliver selling their bodies for exposure?

Um, no. Tom would not approve me thinks.

Her behavior is just demeaning to women who have worked hard to be taken seriously. Sadly, Tom's co-host Padma also has fallen under the pressure to be exploited

Source: Only Knives [photo not shown]

It seems Giardia's time is so precious that "The author will sign up to two books per person; due to the number of attendees and time constraints, de Laurentiis will not write personalized messages in the books."

Well, aren't we miss thing. Buy my books and I will deign to sign them with the least amount of effort possible after you stand in line for hours to look at my boobs.

I might have seemed adamant in my insistance she was a less than desirable person to buy a $20 cookbook from just to get an autograph.

CG asked for clarification if I would be mad if he went. He asked me if I was telling him he couldn't go.

I told him to do what he thought was the right thing. Make the best decision....

He's in his office now sulking.

RECENT POSTS:
--A Conservative Mother & Gun Control? Get Out!
--Whining About Wine
--Boys Scouts, The Great Outdoors, and... Video Games?
--Boobcakes or Boobquakes: It's all for a Good Cause