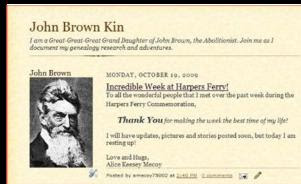 BLOG DESCRIPTION: Follow a direct descendant of John Brown as she researches and documents her family history

MY REVIEW: I am more interested in the Civil War time period itself (the military battles) rather than the time period leading up to it, when diplomacy ultimately failed and "cold iron" was necessary to settle the question. Nevertheless, it's fascinating to read about the people of that time period, and what they were willing to sacrfice for their beliefs.

This is a well-written blog, with an author who knows her stuff. Obviously, since she is a descendant of John Brown. Anyone with an interest to the time period leading up to the Civil War, and anyone interested in genealogy, will find this blog of interest.

At the John Brown Remembered Academic Symposium held at Harpers Ferry, WV in October 2009, I had the pleasure of meeting Ian Barford. Ian is an actor, documentary film maker, and the proud father of twins! Last week, Ian traveled to Texas to do interviews for the documentary he is currently working on about John Brown. He traveled to Austin first to interview my good friend Evan Carton, author of Patriotic Treason. He then drove up to Allen to interview me. While he was here I showed him my prized family artifact - Oliver Brown's Bible that he carried throughout his years in Kansas.

The Bible is small, 2 1/2 inches x 3 1/2 inches and just over an inch thick. Just the right size to be carried in an inside pocket of a wool overcoat. The cover is black leather embossed with an ornate design. On the spine, the words Holy Bible are embossed in gold. For a book that is over one hundred sixty years old, the binding is realitively tight, the cover only slightly torn.

On the inside back cover the following is written in pencil, in an ornate old-timey script:

This Bible was carried all through the Kansas troubles by Oliver Brown.
On the left hand inside back page is written the name of the original owner of the Bible, Oliver Brown, in ink and in a beautiful calligraphic hand.

But it is what can be found on the front inside cover that makes this Bible so valuable to me personally -- in pencil, written over and over again, in the handwriting of a young girl perfecting her signature, is the name Annie Brown. It makes me smile to think of young Annie, my great-great grandmother, scrounging around for a piece of paper to practice her penmanship on, and noticing a clean white space inside the cover of big brother's Bible. The temptation was more than she could resist. I imagine that she got into a great deal of trouble when it was discovered that she used the inside cover of the Lord's word for her penmanship practice.

Annie had the Bible in her possession when she moved to California in 1863, and it is one of the items that escaped the fire that distroyed her house and most of her belonging in 1896. Annie passed the Bible to her granddaughter Beatrice Cook Keesey, my grandmother.

RECENT ARTICLES:
-Join Me at the 2010 DFW Writer's Conference in April (FEb 19, 2010)
-2010 Winter GeneaBloggers Olymics Update (Awarding herself medals of appropriate colors for things she's accomplished on her blog - very amusing!) (Feb 18 2010)
-Tarantino to Free the Slaves Next? (Not happy about Tarantino's plan to film a movie about John Brown, given his penchant for violence in his films) (Feb 18, 2010)
-Letter from CORE - Letter to Gov to save John Brown Farm (Feb 17, 2010)
-Winter 2010 GeneaBloggers Olympic Games (Participating in the "Olympics' with other geneolocgical bloggers (Feb 14, 2010)