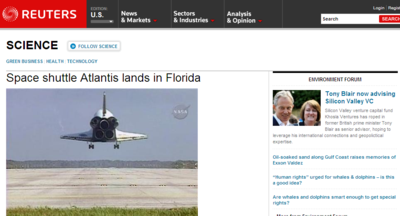 BLOG DESCRIPTION: Reuters is a leading global source for breaking news. Best known as a service that provides reports from around the world to newspapers and broadcasters, Reuters Science News is updated hourly to inform you about the latest scientific research, advances and technologies

MY REVIEW: It is imperative now more than ever that people be science-literate. Our lives will be more and more impacted by the government (not only our own government but those of other oountries, should we decide to cede our sovereignty over various matters, such as global warming!) and we must keep up with the latest scientific news, not only on space and marine exploration and exploitation, but also medicine, sociological issues, etc.

Reuters is one of several such blogs that has these type of science articles, which appear in newspapers all over the world. Highly recommended.

RECENT POSTS:
NASA calls it quits for Mars Phoenix lander
LOS ANGELES (Reuters) - NASA has officially called it quits for the Mars landing craft Phoenix, two years after the stationary probe touched down on the frigid northern polar surface of the Red Planet, the space agency said on Monday.

Health 24 May 2010Scientists find clues to kidney transplant success
LONDON (Reuters) - European scientists have found a full range of markers in the blood of kidney transplant patients which could predict whether their new organ will be a success and whether they need large amounts of medication to help it.

Health 25 May 2010Astronomer Copernicus reburied in Polish cathedral
WARSAW (Reuters) - The Polish astronomer Nicolaus Copernicus has been reburied in Poland in a lavish ceremony 467 years after his death, media reported over the weekend.

23 May 2010"Human rights" urged for whales and dolphins
OSLO (Reuters) - Whales and dolphins should get "human rights" to life and liberty because of mounting evidence of their intelligence, a group of conservationists and experts in philosophy, law and ethics said Sunday.

21 May 2010Artificial life? Synthetic genes 'boot up' cell
WASHINGTON (Reuters) - Scientists working to make a synthetic life form reported a major step forward Thursday, saying they had created an artificial genome and used it to bring a hollowed-out bacterium back to life.