Half Her Age, Twice Her Age (lifestyle and culture) 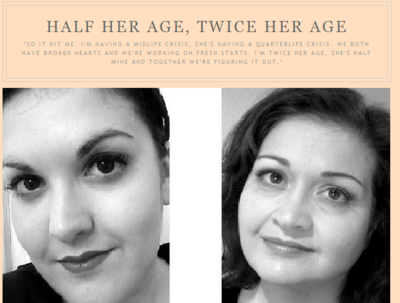 AMAZON SUBSCRIPTION LINK: Half Her Age, Twice Her Age

BLOG DESCRIPTION: "So it hit me. I'm having a midlife crisis, she's having a quarterlife crisis. We both have broken hearts and we're working on fresh starts. I'm twice her age, she's half mine and together we're figuring it out."

MY REVIEW: This is a fascinating blog, written from two different points of view. A "she said, she said," but from the point of view of mother and daughter, not of man vs woman.

It's very enlightening, and fascinating, and I think most women will like it (as will any guy who wants to figure out what makes women tick. ; ) )

The only flaw is that they only post once a week or so... but then the blog entries are extremely long and detailed - and that care and craft takes some time to write!

Sample post(s):
(The two opening posts in the blog which explain how it came about):

II. The Most Disastrous Year.

The most disastrous year of my life was my twenty fourth. In the eight months leading up to my twenty fifth birthday; I moved my apartment into my parents garage, quit my full-time job, and walked away from a serious relationship. Considering how drastically my life changed in such a short time, I dreaded the end of summer and the celebratory day that would be twenty five years away from the womb.

Age can seem irrelevant until you start looking forward and backward and asking yourself insane, unanswerable questions. For me that day was August 31st, 2009. The biggest question: "How did I end up here?" I compared myself to other's my age and realized I'd thrown away an education, a career, and any sort of plan. After having a brief John Mayer "quarter life crisis", I decided to detach myself from my mother's couch and start anew.

In fact, the "new start" backfired and left me worse off. I lost my car, my job, my apartment, my fantastic credit score and my patience for moving.

I'm having a very interesting year and we started this blog to share our two lives together and our two lives apart. Exactly ten days after I kissed a girl, my car accident would take place and start this cataclysmic chain of events that would my make life very disastrous indeed. ~Braticas
Posted by DazzledGirl and Braticas at 9:55 PM 0 comments

The most dangerous year of a woman's life must be her forty ninth. I know it is for me. I've changed jobs, lost my husband, lost my home, had a lump removed, my mother doesn't know who I am and my daughter came out of the closet while on a morphine drip after a car accident that left her car-less and homeless. There's more. Lot's more. But that will drip out slowly on it's own.

Oh yeah. And I fell in love.

Age can be irrelevant until you wake up one day and start looking backward and forward and asking yourself inane, unanswerable questions. For me that day was August 3, 2009. The biggest question: "What was I thinking?"

Ah, the different perspectives. Two views of the world inexplicably intertwined by two women sharing so much yet so incredibly different. So much to write about!

Case in point: she's a beta tester for a new website http://www.fantourage.com/fz/210/fantourage and invited me to play on the site before it was live. It's a site for fan and celebrity interaction and we both just loved it. One of the goals is to get feedback or interaction from celebrities so we follow them on Twitter. Or maybe stalk them is more appropriate? Anyway...I get a frantic text at work one day from her. Liz Feldman tweeted and retweeted her! OMG, LMAO, WTF etc.

Pretty impressive, I must say. Until Hugh Grant tweeted and retweeted me! I'm sorry but Hugh Grant beats the lesbian comedian any day of the week. I don't care who you are. And why are you still reading this when you should be opening www.twitter.com/dazzledgirl so you can read what @hgclaretjug had to say? Oh, btw, Hugh doesn't turn 50 years old until September 9, 2010 but that's OK, I like younger men.

So I'm having an interesting year and we've started this blog to share our two perspectives. Since I have Hugh Grant on my mind, all I can tell you is that for me, it's all About A Boy. And that Boy kissed me on my forty ninth birthday and the year became very dangerous indeed. ~Dazzledgirl

RECENT POSTS:
--XII. Kiss Me Goodbye, I'm Defying Gravity
--XIII. Song of the South
--XIV. The Notion Of The North
--XV. The Masks We Wear