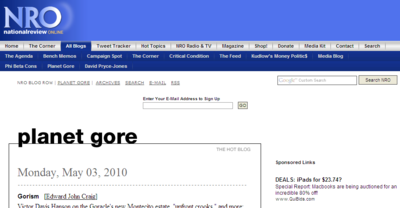 BLOG DESCRIPTION: Planet Gore is National Review Online’s “global warming” blog, on which a team of experts report and comment on the myriad scientific and economic issues surrounding the contentious global warming debate. This blog is one of the web’s top stops for informed news and views about climate change, alternative energy, environmental activism, and of course, Al Gore’s carbon footprint.

MY REVIEW: This blog is on the "man-made global warming is a hoax" side of the debate. And for the most part I agree with them. (On the other hand, given man's ineptitude, I don't really want companies drilling in pristine areas where the last of the world's wildlife is living. I may not be able to see them, but I know they're there, and they're accomplishing a lot more for the planet then people living in a slum, or rich people living in one of their six or seven houses blowing the money they don't know what to do with on drugs or another car or something).

However, regardless of what side of the debate you are on, you will find this blog of intersest. The only problem is that for some of the posts, you do have to click a "read more" button... but those buttons aren't hot. This only affects a few of the many posts, however.

We all know that Al Gore has become a near billionaire through tirelessly warning the Western world that our daily habits have ruined the planet and nearly doomed us. Gore argues that what we take for granted — the too large homes in which we live, the carbon-spewing cars that we drive, the superfluous vacations and energy-hogging appurtenances that we enjoy — are all pernicious to the environment, and unsustainable.

Nor did the horrendous natural ash cloud that blanketed Europe — and in unprecedented fashion shut down all European air travel for days — remind a humbled Gore that sometimes nature in a second has the destructive power to alter the very way we live in a way that man does not over decades.

No, what ended the gospel of Gorism was Al Gore himself.

In this context, the recently purchased Gore second mansion at Montecito, in Oprah country, is of some national interest. Why would Gore purchase a second energy-guzzling estate, replete with several fireplaces, fountains and bathrooms, when he was stung so badly about his hypocritically profligate energy use in his Tennessee compound, his houseboat, and his private-jet junketeering? Does he understand that his newest mansion is a sort of volcanic ash-cloud that has now overwhelmed Earth in the Balance, Inc?