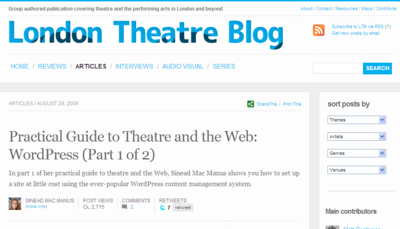 BLOG DESCRIPTION: London Theatre Blog provides high quality, up-to-date content on everything related to the London theatre scene. From show reviews and in-depth articles to interviews with practitioners and behind the scenes videos, this is the UK's premier site for theatre.

MY REVIEW: I love London theatre. This is a must read for anyone who likes theatre, or anyone travelling to London in the near future who wants to catch a play or two.

Journeys of Love
A feast for all the senses, Journeys of Love could prove to be Motiroti’s most outstanding show to date.
Motiroti is a unique British theatre company whose dazzling site-specific, multi-media productions are the stuff of legend. Their latest production, recently performed at Sadler’s Wells’ Lillian Baylis Studio, is an intimate affair which charts the personal journey of company artistic director, Ali Zaidi. Journeys of Love unfolds in a room filled with tables, a scene set for an evening meal.

Three actors walk on stage and take turns describing, and at key moments enacting, scenes from Ali Zaidi’s action-packed life. Behind the actors are three large video screens onto which images are projected throughout the evening. Images which at times comment on what has just been said or at others help to illustrate an important point. Such is the case of the beautiful stills taken from Zaidi’s father's films.

As a renowned director in India’s flourishing film industry, Zaidi’s father encouraged his son’s early love of cinema by getting him to appear in many of his films. This idyllic childhood was shattered though when Zaidi’s father took the family on a mysterious picnic – a picnic which only ended once the family had arrived in Pakistan. This was perhaps a journey that his father felt compelled to make as a Muslim living in India.

The play then jumps forward to show a teenage Zaidi, a boy constantly testing the limits of his family’s patience. Zaidi playfully describes his younger self as “the one with horns”, an expression used to describe a child who could be seen as presenting a challenge to his parents. The biggest challenge though, comes after emigrating to England and returning home with his male lover. One of the most moving moments in the piece comes when the young adult Ali addesses his uncomprehending father. The father is played by Zaidi himself and is shown only as an image projected on the wall. What makes this conversation so moving is that it not only highlights his father’s inability to completely understand his son but also his desire to continue to try to find a way through this seemingly impossible impasse. Throughout the evening delicious Indian delicacies are served, created from Zaidi’s own recipes.

The piece concludes with an account of a recent incident which took place in India when Zaidi returned for a brief visit. A taxi driver, unaware that Zaidi is Muslim, cheerfully recounts attacking Muslims in a recent upsurge of secrtarian violence. Once Zaidi reveals to the driver his religious persuasion, the man is stunned. When they arrive at his destination the driver refuses to take Zaidi’s tip, but instead gets out of the taxi and to Zaidi’s surprise embraces him. In many ways this single act ecapsulates the central theme of the play: the most important journey any of us can make is the the journey to love those around us.

A feast for all the senses, Journeys of Love could prove to be the company’s most outstanding show to date.

RECENT POSTS:
--Green and Pleasant Neverland
--Journeys of Love
--Borges and I
--The Extraordinary Cabaret of Dorian Gray
--Jack Pratchard