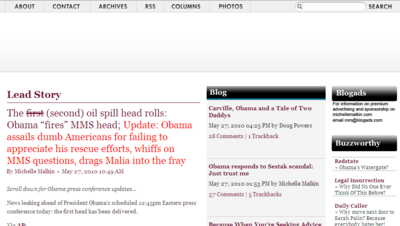 MY REVIEW: If you're a conservative in your political views, you'll definitely like this blog. Malkin brings a razor of wit to the sophistry of Democrat policies and Obama's failures in particular. (Yes, I'm a Republican!)

It's $1.99 to subscribe, but there are multiple posts a day. Occasionally she shares videos, which of course can't be seen on the Kindle.

Whether you're a Liberal or a Conservative or just someone fed up with the culture of incompetence and corruption from ALL our politicians in Washington as well as at the state level (at least, in many states) you really should get her side of the story.

Democratic sources say the Obama administration has fired the head of the U.S. Minerals Management Service in response to blistering criticism over lax oversight of offshore drilling.

The sources, speaking on condition of anonymity before the official announcement, tell The Associated Press that President Barack Obama will announce the decision Thursday.
Meanwhile, there are reports that BP’s “Top Kill” strategy to plug the leak is working:

BP has stopped the flow of oil and gas from a ruptured well into the Gulf of Mexico, a US official told local media.

The company’s “top kill” effort has “stabilised the wellhead”, Coast Guard commander Thad Allen said, adding that it was too early to declare success.

This is the first step, using mud, in BP’s plan to seal the well for good with cement.

Eleven workers were killed in the initial explosion on the Deepwater Horizon rig five weeks ago.
***

Make that the second head to hit the ground. As I noted last week, MMS official Chris Oynes resigned after news of the agency’s 2009 safety award for Deepwater Horizon surfaced.

Critics on both the left and right want to know: What about Heckuva Job Kenny Salazar?

Obama defends his sluggish response by criticizing dumb Americans. Bottom line: You all are too stupid and uninformed to realize that this has been his “highest priority” and that the White House has been “singularly focused” on the oil spill.

Obama: “Those who think we were slow in our response or lacked urgency don’t know the facts.”

Obama writes his own self-aggrandizing history: “I’m confident that people are going to look back and say that this administration was on top of what was an unprecedented crisis.”

1:42pm Eastern. Obama insists he is working with full urgency on the issue, but refuses to take ownership of firing MMS head Liz Birnbaum. He said he only found out about it this morning when he was “busy with other things” (um, wasn’t he “singularly focused” on oil spill?) and that he is unclear about the circumstances of her stepping down.

Dragging his daughters into the public fray again: “Did you plug the hole yet, Daddy?”