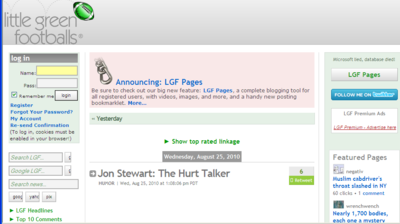 MY REVIEW: This blog is well-written, and covers the issues of the day. He's a Liberal, and so of course I disagree with practically everything he says! However, it's important to read these things, even if you disagree with them, to see where they are coming from.

Johnson is in support of the Mosque at Ground Zero, for example (along with many other people) and doesn't understand why people object to it. (As Rush Limbaugh states, they don't object to the mosque, just that it not be built there.)

In any event, interesting reading. Check it out.

Conservatives Waking Up to Global Warming?

There are signs that some right wing climate change deniers are finally waking up.

Science editor of the Daily Mail, Michael Hanlon, announced last week that he is changing his stance on global warming due to recent events in Greenland and his trip to this country (which he now refers to as “Global Warming Ground Zero”). Hanlon wrote: “I have long been something of a climate-change sceptic, but my views in recent years have shifted. For me, the most convincing evidence that something worrying is going on lies right here in the Arctic” (emphasis added). Joss Garman of Left Foot Forward said Hanlon “could previously be seen as the UK’s most influential ‘sceptic’” and has a good story on this and other recent changes in conservative media as concerns global warming.

Now, most recently, oil-funded Pat Michaels, “a scientist who now works for the Cato Institute, the libertarian think tank that strongly opposes caps to carbon dioxide,” and who has promoted global warming denial for decades, has acknowledged that addressing global warming is an issue of “political acceptability.”