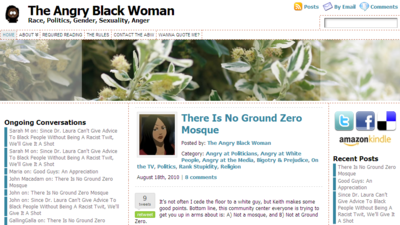 BLOG DESCRIPTION: Discussions of Race, Politics, Gender, Sexuality and the intersection between them.

MY REVIEW: This is an interesting blog that deals with issues of lifestyle and culture, arts and entertainment, and politics from an African American perspective. Well written, well-thought out posts, with the occasional four-letter word used for emphasis. If she's really annoyed about her topic, she uses more, as you see in the sample post below.

Although I've placed this in African-American interest, really her topics are of interest to all Americans. Check it out.

The one caveat - she seems to post only once or twice a week at most.
Sample post

Political Apathy: Don’t Have It
July 5th, 2010
Since it’s 4th of July weekend, I thought I should post something vaguely patriotic. However, since I share very similar feelings on this issue as my friend Cat, I’ll have to skip the flag waving and talk about another America-centric issue close to my heart, instead.

Primary results are in from all over the country, and now constituents know who their party candidates are for federal, state, and local government. The more I listen to NPR, the more I hear that everyone is against incumbents, everyone is against the Democrats, and there’s really no hope for the midterm elections. Unless you’re a conservative.

To this I say: bullshit.

Look, I am well aware that not everyone is happy with the Obama administration, and after the last midterm election even Cindy Sheehan threw up her hands and lost hope for our government. While I agree with ultra-left progressives that the past year hasn’t been everything we wished for, I don’t think it’s all that helpful just to complain, turn our backs, and let the goon squad make it even harder to get a tiny bit of what we want done.

So, now that the election is mere months away (it seems far, but it is not), I challenge all of you to work for the kind of government you want. That means being involved in the political campaigns of the senators and representatives up for election and re-election in your area.

Support the campaign. If you can give money, do so. If you can’t give money, give time. You don’t need to commit to every evening and weekend from now until November. One weekend, one phone bank session, one letter-stuffing drive is helpful.

Know your candidates. Who are these people, anyway? It’s much easier to be an advocate when you know something about the person beyond their name, slogan, and party. Do you even know where your party candidate stands on those issues, laws, and bills? Do you know where their opponents stand? Do your friends and neighbors?

Use your voice. Blog about the candidates in your area and why you support them or why you don’t. Talk about the issues that matter to you, the laws that have been passed, the bills that died. Use your voice in other arenas, too. Write an op-ed piece for your local paper, call in to radio shows, use social networks, make a short film using your cell phone camera (seriously), start a podcast.

Don’t just shill; challenge and demand. If you feel passionate about an issue or cause and want that candidate to be passionate and fight for it, tell them so. Find out if they agree. Challenge them to do or do better. The campaign process isn’t just about sending someone to office because they have the right party affiliation. They are accountable to you. Don’t let the vocal minority be the majority of people your candidate hears from.

Try to have meaningful conversations about issues that effect you. As we all know from watching the talking heads on 24 hour news channels, you can’t really understand someone else’s point of view if everyone is yelling. When you talk to people about why you support this or that candidate or this or that issue, really get into why. You’d be surprised how many people are willing to listen when you actually just talk. (I discovered that after starting this blog, actually.)

If we don’t take the attitude that a Republican/Tea Party win is inevitable we have a chance of making the better world we dream of. So that’s my patriotic challenge to all of you: don’t let apathy pull you down.

From now until the election there will be an Open Thread on Mondays for discussions of political and election-related topics. Share links, talk about your experience, your frustrations, your candidates. We are, of course, very interested in political issues dealing with women and people of color here at the ABW. That might be a good place to start.

RECENT POSTS:
--There Is No Ground Zero Mosque
--Good Guys: An Appreciation
--Since Dr. Laura Can’t Give Advice To Black People Without Being A Racist Twit, We’ll Give It A Shot
--The Last Airbender’s Target Audience Thinks Whitewashing Is Wrong, Too
--On Being A Considerate Parent
--Whitewashing: Stealing our stories from real life to fiction.
--Realms of Fantasy Columnist Condones Whitewashing When “Magic” Is Involved
--Political Apathy: Don’t Have It
--Why you should not see “The Last Airbender” movie, but watch the cartoon instead.