The Friendly Atheist (lifestyle and culture) 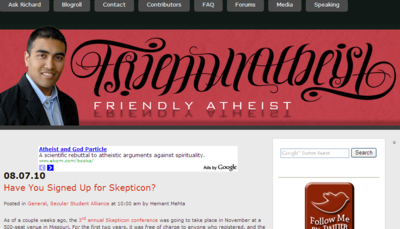 BLOG DESCRIPTION: This is the blog of "eBay Atheist" Hemant Mehta. Mehta writes about atheism for both religious and non-religious readers. He is also the author of "I Sold My Soul on eBay."

MY REVIEW: As an atheist, I enjoyed this blog for the most part. Well written, interesting stories. However, as a woman I'm always amused because the religion that American atheists go after 99% of the time is Christianity, whereas it's the spectre of Islam gaining hold in the US that has me terrified. (Well, I'm not terrified, because I don't think it can happen, but I think Islam is much more of a danger to the world than Christianity. However, it is a helluva lot easier for atheists to debate/mock Christianity than it is to do the same to Islam, cuz it's the Muslims who will take out their machetes and kill you.)

Well, don't get me started on that rant.

Anyway, this blog is of interest to atheists. It should also be of interest to Christians, to see what atheists think, and why they think what they do.

Are Home-Schooled Children Really Smarter?
Posted in Education, General at 6:00 am by Hemant Mehta

The Creation Museum founder Ken Ham has a nasty habit of not linking to websites he trashes or offering citations when he makes his wacky claims.

So when he mentioned that home-schoolers excel in college, and provided a link to the reference, I got very excited.

The link goes to the Home School Legal Defense Association — a Christian group — and they have issued a press release about a new study!

Therefore, it was with great interest that we read the new study — Exploring Academic Outcomes of Homeschooled Students, by Michael F. Cogan — which shows homeschoolers succeeding in college.

Some of the major findings include:

How many home-schooled students were used as data points?

How many states were represented in the study?

Where was this study published?

Here’s all I can find to answer those:

The study was based on a medium sized college located in the upper Midwest. The school has 11,000 students with an average 1,320 freshmen each year. The sample size for homeschoolers was 76 which is 1 percent of the 7,776 incoming freshman for 2004–2009. The majority of the student body (54.9%) identified themselves as Catholic.

In other words… Cogan went to one college — a private, Roman Catholic school in the midwest — and got the data for the 76 kids who, over the past six years, were home-schooled beforehand.

If I proposed this study in a Research Methods class, I would fail immediately.

This is likely an anomaly — who knows how many home-schooled children applied but didn’t get accepted into the school? What makes this school typical for all home-schooled college students? If anything, a private school of that size is going to draw in more affluent, better-educated kids overall.

And from the looks of it, this “study” wasn’t published anywhere.

At least we can read it for ourselves, right?

All you get is a link to Powerpoint slides (PDF) Cogan must have made to explain the findings.

I’m sure I’m missing something here. Am I being fair about this study? Am I forgetting to point something out? Is there a link to the study I’m missing?

For what it’s worth, I think home-schooling can work… but in too many cases, it deprives children of a fuller education and the opportunity to socialize with peers who may think differently. There’s often a hyper-focus on religion and a lack of focus on subjects the parents know little about. Even among atheist households, I get nervous when I hear that parents are home-schooling their children.

Some parents do it wonderfully, but in my experience, they are the exception and not the rule.

RECENT POSTS:
--Have You Signed Up for Skepticon?
--Are Home-Schooled Children Really Smarter?
--The Caption Made Me Laugh
--What Can Atheists Learn from the LGBT Movement?
--Tuesdays with Hitchens
_______________________
Check out the following blogs:
Seaborn: Oceanography Blog
Star Trek Report: Space SciencesTopical Murder and Dated Death