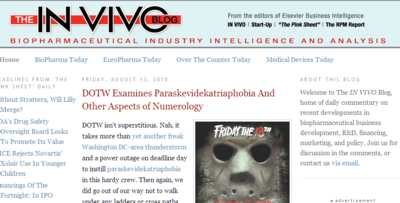 MY REVIEW: According to its website, this blog is supposed to be updated daily, but it's more erratic than that. Sometimes once a week, sometimes two or three times a week. But it may be because it's summer vacation.

Anyway, for those people interested in what biopharmaceutical companies are doing in general, and those interested in investing in their stock, this is an important blog to read.

In Vivo Deals of the Week
UCB/Actient: It's tempting here to go back and dig up the last time we wrote about a UCB deal in this space and just cut and paste the whole blurb. UCB ... you know what? Why not. We'll change the relevant bits: UCB has slowly but surely been paring down its primary care activities in favor of specialty products, even garnering an IN VIVO Blog Deal of the Year nomination for its emerging markets deal with GSK. Today, the company announced it would accelerate that process by offloading US rights to its soon-to-be-off-patent allergy drug Xyzal to Sanofi-aventis and end its co-promotion around Teva’s albuterol ProAir six mature products to Actient Pharmaceuticals, a company owned by PE fund GTCR. Those products, which Actient has the option to buy, brought in a combined $53 million in 2009 and comprise: Edex (alprostadil for injection), Theo-24 (theophylline anhydrous), Semprex-D Capsules (acrivastine and pseudoephedrine hydrochloride), Levatol (penbutolol sulfate), Robaxin (methocarbamol tablets, USP) and Dilatrate-SR (isosorbide dinitrate). The future of UCB now rests largely on the emerged-market performance of its immunology and neurology franchises, dominated by Cimzia, Vimpat and Neupro.--CM

Astellas/Regeneron: For big mAb technology platforms, Regeneron seems to think it may be the only independent game in town, and that suits it just fine. On July 28, Regeneron announced that it and Astellas had more or less torn up and replaced their ongoing six-year, non-exclusive licensing deal through which the Japanese drug maker uses the VelocImmune technology platform to discover fully human monoclonal antibody candidates. Under the original deal signed in 2007, Astellas paid Regeneron $20 million annually for VelocImmune access. Terms of the new deal call for Astellas to pay Regeneron $165 million upfront for continued use of the platform from 2011 to 2018, a slightly higher annual rate than the original agreement specified. Further, if it wants to continue the relationship through 2023, Astellas will pay another $130 million in 2018. Regeneron said Astellas has 20 ongoing development projects from VelocImmune, for which the biotech could receive a mid-single-digit royalty on products that reach the market. The Astellas cash adds to an impressive pile of up-front payments Regeneron has stacked up from the likes of Sanofi-Aventis and AstraZeneca for non-exclusive use of its technology. "This is just a reaffirmation of the fact that some very sophisticated consumers have believed and invested at an unprecedented level in this technology," CSO George Yancopoulos told "The Pink Sheet" DAILY. "Astellas has gotten to play with this for three to four years and they're so excited about it that they don't want to risk at all not maintaining their access to this, so they're willing ... to pay the $165 million upfront."--Joseph Haas

Illumina/Helixis: The deal closed almost three months ago, just days into its second quarter, but Illumina did not announce the acquisition of real-time quantitative PCR specialist Helixis until this week, when it said it would begin shipping the latter’s benchtop Eco Real-Time PCR System for benchtop genetic analysis next month. Though clearly not anything close to a material event, the deal, for $70 million cash plus up to $35 million in potential contingent revenue milestone payments through 2011, extends Illumina’s product line, “very consistent with our strategy of having tools that address the broad range of complexity that customers want, all the way from full sequence down to single marker,” said CEO Jay Flatley on Illumina’s 2Q conference call, held the same day the product launch was announced. “This is a technology that reinforces that to a great extent on the very low end,” he said, referring to genetic analysis requiring less than 96 markers, at “approximately a quarter of the price of systems with comparable performance,” and with a smaller footprint. Initially focused on the research market, the Eco system will run most commercially available qPCR assays. But Illumina also expects to add its own consumables, creating a high-margin follow-on business and more closely aligning itself with competitors such as Life Technologies. The acquisition is expected to be breakeven to “somewhat accretive” in 2011. -- Mark Ratner

GSK/Anacor: Not actually a new deal, but we like to highlight when options get exercised -- or passed over -- given how much we like to talk about option-dealmaking as an integral part of the future of biopharma business development. This week Anacor said that GSK was optioning GSK2251052 (f.k.a. AN3365 and thankfully abbreviated '052), one of the systemic antibiotics from Anacor's boron-chemistry platform available to the Big Pharma under the terms of the companies' 2007 option-alliance. Anacor gets a $15 million option-fee and is eligible for further milestones and royalties as GSK takes over the program and pushes it toward commercialization. The compound, which is in a Phase I study, is potentially active against a raft of gram-negative bacteria and will be developed as a potential treatment for complicated urinary tract infection, complicated intra-abdominal infections, and hospital/ventilator-associated pneumonia. --CM

Charles River/Wuxi Pharmatech: Shanghai's WuXi PharmaTech has been abandoned by the Massachusetts-headquartered Charles River Laboratories on the eve of the two contract research organizations' merger. To halt a nascent rebellion by shareholders who were set to vote on the merger one week from now, Charles River called off its $1.6 billion pursuit of WuXi and will instead pay China's leading drug research outfit a $30 million breakup fee. It’s not the first time WuXi was left at the altar; the CRO was jilted in mid-2008 by Covance, which abandoned plans for a joint preclinical drug testing lab. RiskMetrics Group, a proxy advisory firm, issued a report on Monday recommending that Charles River Laboratories shareholders vote against the WuXi acquisition, tipping the scale toward the vocal opposition. The insurrection by shareholders was led by New York money management firm Jana Partners, which cited its high cost, integration risks and bad timing. Not everyone saw it that way. The combination, aimed at creating a platform allowing innovative drug developers to conduct preclinical studies across the Northern Hemisphere, would be "laying the foundation for future R&D in China," predicted WuXi CEO Ge Li. Full coverage in today's PharmAsia News.--Kevin Holden

RECENT POSTS:
--DOTW Examines Paraskevidekatriaphobia And Other Aspects of Numerology
--Deals of the Week's Summer Vacation (stock tips for Biopharmaceutical companies)
--Financings of the Fortnight Struts and Frets but Finds No Exit
--Pediatric Exclusivity for Viagra?! It's No Joke