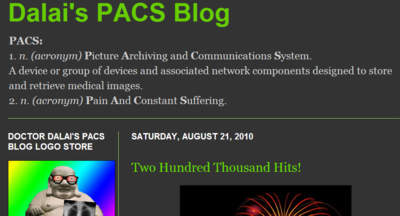 BLOG DESCRIPTION: An irreverant look at PACS, radiology, medicine, and life in general

MY REVIEW: What is PACS, you may be asking yourself. (If you are, you perhaps won't be interested in this blog.) It is: "Picture Archiving and Communications System. A device or group of devices and associated network components designed to store and retrieve medical images."

I found it an interesting read. The author is a radiologist, and yes, the terminology was over my head, but one could get the gist of what the author was talking about, and it was an intersting introduction to a whole new world.

For those people who know what PACS are, I'm sure this blog will be of great interest!

The author also makes a few "off topic" posts, about politics, and life in general, so give it a try.

SCRU-Verse
We live in a Broadband world, and ultimately, it shouldn't matter whose pipe dumps the bits and bytes into your lap. Thus, when AT&T's U-Verse became available in my neighborhood, I thought it was time to jump ship from Time Warner Cable. After all, even the rather pricey Business Class was only delivering about 4-6 Mbps, and 50+ channels of non-HD. For the same price, I figured I could go with Ma Bell and get a better deal. So I did.

Before I dive into my personal tail of woe, I need to tell you just what U-Verse actually is. From ATT.com:

AT&T U-Verse® uses fiber optic technology and computer networking to bring you:
* Advanced digital TV
* High speed Internet
* Digital home phone serviceIt's basically a big data pipe like I said at the beginning, delivering the goods via fiber and DSL instead of cable. The TV end of the package is pretty good, with innumerable digital and HD channels. They are all full of the usual mind-rot, but having 200 or 300 channels of mind-rot has to count for something. And you can record them for playback on any TV in the house. AND there's an iPhone app for remotely programming the recorder, which is also great for impressing your less-than-technical friends.

Since Mrs. Dalai doesn't like to deal with change (you know who she didn't vote for), I arranged the switch-over to take place while we were en route back from Peru in mid-June. Thank Heavens for my PACS guru, who gave up most of his Saturday to supervise this fiasco. It seems that even though my neighborhood is "U-Verse ready," the fiber or whatever hadn't quite made it down to my end of the street, so that had to be, ummmm, laid (which sets up the theme for what's to come) before any other progress could occur. Then, because I had two phone lines which were billed separately, the BIG AT&T BILLING COMPUTER wouldn't allow voice to be activated. Even so, they got the TV (and associated boxes and DVR and remotes and so forth) running nicely, and the 18Mbps internet came up properly as well. (I actually max out at only 14Mbps for my download speed, but that's still a lot better than where I was.)

So far, so good. All the while, the old POTS (plain old telephone service) analog lines were working nicely as well. Sadly, I tend to ignore the old maxim that tells us the enemy of "good" is "better." More importantly, there were lower prices and lovely rebates to be had for those who added on U-Verse Voice (which is really Voice Over Internet Protocol, VOIP, using the shiny fiber broadband pipe.) Thus, I insisted, over Mrs. Dalai's wise protest, upon having Voice put on as well. This was not a good move.

We've had U-Verse voice up and sort of running for about a month now. It works, but it has glitches. Our particular glitch involves a strange buzzing feedback when the victim on my end speaks into the phone. Of course, that doesn't start until about 5-10 minutes into a call. It is INCREDIBLY annoying, and ultimately intolerable. I've had AT&T out to look at everything about 5 times, and I've been on the "chat" with Tier 1, Tier 2, and all of the other Mouse-ke-Tiers on about 30 occasions. Every time, they bounce the 2Wire Residential Gateway (a big fancy router), which disturbs Mrs. Dalai's Farmville activities, and thus creates even more grief in the house than the malfunctioning phone itself. And every time, the phone acts properly for the first five minutes of a call, just enough for Nahtanoj, I mean Jonny, to sign off on our case, and then..... BUZZZZZZZZZZZ.

By this afternoon, I had had enough of this nonsense, and got downright pushy with Haripol, I mean Paul, the Tier 1 helper du jour, and demanded that they come out and fix it or yank it. I was trying to do this from work, and Paul kept asking me to unplug and plug in phone wires, which we've done 50 times before. I typed in all caps to show I meant business: "NO! I WON'T! YOU SEND SOMEONE OUT TO FIX THIS DOG OR I'M GOING BACK TO TIME WARNER!!!" To which Haripol replied, "OK, but if the tech does what I'm telling you to do, and that fixes it, we'll charge you $50." He didn't need the computer to hear me squawk about that statement.

Ultimately, we got someone out to look at it one more time earlier this evening. All I can say is God bless honest people. The gentleman from AT&T got to our house, examined the tangle of red, green, yellow, and black wires, and said, "You know, I'm finding this situation quite often, where the digital phone just won't install properly in some houses." Well, I'll be darned. You mean to tell me the damn thing actually might not work? I'm not crazy? Of course the latter determination is not in AT&T's scope of operations, but the former turns out to be the case. Our new best friend from Ma Bell went on: "AT&T rolled out VOIP before it was ready. When you hook up the old wiring in the house to the digital output, you have done little more than create a huge antenna, and it picks up any strong radio signal in the vicinity. I was just at a house on the other side of town that couldn't work with U-Verse Voice at all because the guy next door had a big CB base station."

Eureka! That is why the interference and bad behavior doesn't start right off, although for the life of me, I can't imaging what RF source is causing the problem. Whatever. U-Verse Voice has to go. I've put through the order for the phones to be switched back to POTS. And they darn well better not try to take my rebates back, either. I've already used the stupid VISA gift cards!

Here's my revenge on U-Verse. I'm telling everyone I know: DON'T GET U-VERSE VOICE!!! Not until the technology improves! Seriously! This isn't ready for prime time. Of course, even if I get everyone to avoid U-Verse Voice, the victory is pyrrhic at best as POTS costs more. But sometimes you have to stand up for your principles.

RECENT POSTS:
--Two Hundred Thousand Hits!
--SCRU-Verse
--Reagan Was Right Again
--Hooked Again
--You Should Have Seen The One That Got Away...
--DoctorDalai.com "Noteworthy"!
--Doctor Dalai and the Demo