"It's great to be young and a Yankee." (Baseball) 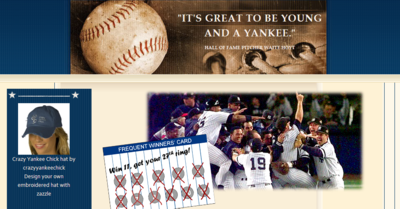 AMAZON SUBSCRIPTION LINK: "It's great to be young and a Yankee.", by Crazy Yankee Chick

BLOG DESCRIPTION: Daily recaps, highlights, analysis, and a general bullpen of observational commentary...plus everything a Crazy Yankee Chick does in between watching the Yankees, Giants, and Rangers.

MY REVIEW: This is a heckuva fun blog. (If you're a Yankees fan. I'm not. Booo hiss!) The author covers each game, in detail, in her own inimitable style. As you'll see in the sample post below, she knows her baseball. I don't really care for some of the language she uses, but it's not that egregious, and younger people of course won't mind it.

That's how many feet of bombs came off the Yankee bats during the course of this game. The longest one, improbably, came from Jeter. This wasn't like a GGBG-esque basehitter homerun. This was like a Giambi in the pouring rain moonshot. Dammmmn, #2. And dammmmn, Yanks. But let's be honest, you're the Yankees. This is what you do, right?

The J's just temporarily forget that they're the not the Original. Just a $10 generic version that comes out years after the original brand name, legitimate prescription.

So last 2 nights ago, Bautista acted like a little bitch and took his sweet ass time rounding the bases. Because "lookatmelookatme I'm the homerun champ so far!" You guys are like 108 games out of the division.

But, hey, if that's how you want to do it, the Yanks are game. In fact, they're so game that they'll show you exactly who the real kings of [bat] pop are. As my often quotes from his favorite movie, "You may be a one-eyed jack around here, but I've seen the other side of your face."

I'm not entirely sure what this means, but it sounds menacing, which is basically all I'm looking for here.

By the 3rd inning, the Yanks were up 6-0, thanks to 3 dings in the 3rd inning alone. Monster blast from Tex, a 2-run shot from Timms, and a solo from Jorge.

2 innings later, Grandy and Jeter both went yard, and the J's were reeling. (No fights though!) After 6 innings, the Yanks were sitting on an 11-1 game. The J's had a measly 1 run from an RBI single off the bat of Vernon "My Name is Vernon if that gives you any idea of how f'n old I am" Wells.

Moseley gets the win, and this guy is starting to remind me of Brain in Inspector Gadget or something. Like the guy behind the scenes that you don't really pay much mind to. I've suggested that this guy was lifted from some stock imagery website.

Or, rather, his line scores have been. 2 runs, 5 hits, 4BBs, 4Ks, 6 innings. Your basic fare from this guy. And basic is being liberal. It's more like your lock-it-up numbers from this guy.

Gaudin came in for relief, and managed to avoid intentionally/unintentionally beaning anyone, much to the dismay I'm sure of the warning-trigger-happy umps. Kerry Wood closed out the game with a scoreless 9th. Well, Mr. Wood, I'll bite.

(Oh Good God, did I actually just write that?? Moving on...)

Ok, KERRY, I'll SAY IT. You're not working out too badly. At all. I had my doubts. Lots of em. I thought you'd be the new Esteban Loiza or something.

But I guess it's true what they say about senior citizens. And by "they" I mean Lloyd Christmas. "Senior citizens, though slow and dangerous behind the wheel, can serve a purpose!"

The pitcher for the J's is a guy I had big predictions for last year. He's also a guy who joins Jonathan Albaladejo and Buehrle as players whose names I hate typing with an unyielding passion.

Welcome to the club, Mark Rzepczynski. In fact, I'm making you President. Congrats.

He got chased in the 4th, big surprise there. 6 runs on 8 hits isn't gonna impress anyway and pretty much guarantees you the L. Which he got.

The Yanks had 17 hits on the day, with Tex and Posada both going 4 for 5, Grandy and Timms both going 3 for 4.

Grandy made an OUTSTANDING play at the plate. It was one of those plays that made me think for a second, "Wait, are we the home or away team?" on account of how raucous the cheering was afterwards. Amazing work. It's funny how these things seem to happen RIGHT when The Other Man's name starts lolling around sports journalists' tongues.

As soon as Johnny Damon even remotely starts tiptoeing towards the limelight, it's like Grandy goes, "YES, YES FOR THE LOVE OF CHRIST, I WAS THE RIGHT MOVE."

(On a side note, that's f'n gangsta, Damon. Well done. It's like being on the Yanks reminded you how decent a guy you are. I'm sorry you had to suffer the slings and arrows of outrageous idiocy and classlessness on the Sox for so long. If you're happy, I'm happy.)

The bad news was a foul ball that Swish inflicted upon himself, and put GGBG in mid AB. Who struck out looking.

The other bad news is that the LIFE WITHOUT AROD propoganda has officially set in.

Yeah, only logical conclusion is that Arod sucks, yeah?

Or you could subscribe to the much more reasonable explanation which is that the rest of the team is working to fill in the power gap that Arod left.

Weird stat of the night: The Yankees have 44 four-run innings this season, the most in the majors. Yay? Can we take that to the bank? Eh, sure, why not?

Annoying fact of the night: Javy's moving to the bullpen for the time being, with newbie Nova set to start in his place Sunday at Chicago. This irks me for some reason. I used to get so f'n annoying at Javy in his early starts, because he let everything get under his skin.

But he's shed that habit, and now he's playing strong and composed and it annoys me that the flashy newcomer is pushing Javy to the pen. I don't know. I feel like Javy is getting walked all over. Yeah, it's a business. Yeah, maybe it's a good move. And yeah, he probably doesn't care as much as I do. But I'm just saying. It rubs me the wrong way.

The Yanks stay tied with TB, since the Angels are an unmitigated nightmare in the field. It was like watching a softball team play at 8am on a Sunday morning. ("Stop talking so loud! Why is everything so bright! WHERE ARE THE GODDAMN GATORADES AND SAUSAGE MCMUFFINS?")

And don't listen to anyone. The Yanks are doing great. It's not as "magical" as last year, but sometimes you gotta take the inside straight. It'll pay just as big dividends as getting the cards on the flop, but now we gotta wait for that elusive card on the river.