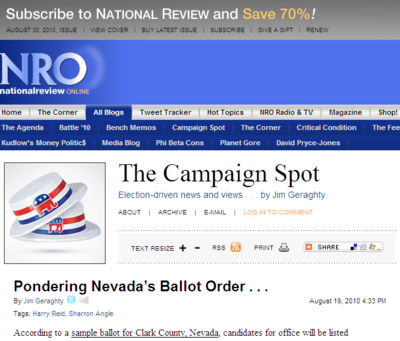 BLOG DESCRIPTION: The Campaign Spot is National Review Online’s blog for all things political and campaign-related. The blog is written by Jim Geraghty, author of Voting to Kill: How 9/11 Launched the Era of Republican Leadership.

MY REVIEW: First, let me share Geraghty's bio from Wikipedia:

During the 2004 US Presidential election, Geraghty was often critical of Democratic Party presidential candidate John Kerry. At the time his weblog used the name "The Kerry Spot". It was later renamed "TKS". Geraghty reported on the Killian documents and Rathergate stories on a daily basis on behalf of National Review and was critical of CBS and Dan Rather. Geraghty was one of the self described Pajamahadeen.

Starting in March 2005, Geraghty posted to TKS from Turkey, where he lived as an expatriate. In January 2007, he moved from TKS to a new blog, originally named "The Hillary Spot"[1] but since renamed to "The Campaign Spot".

Geraghty's book, Voting to Kill: How 9/11 Launched the Era of Republican Leadership (Touchstone, September 2006, ISBN 0743290429) argues that national security and safety in the face of terrorist threats is the key issue in U.S. politics.

Geragthy frequently mentions his maxim "All statements from Barack Obama come with an expiration date. All of them." This recurring theme in his writing is sometimes known as "Geraghty's Rule."

With this current incarnation of his blog, Geraghty bebops all over the map, giving one or at most two paragraph news items about what's going on with the various campaigners for poltical office for the Nov 2 election.

Pretty interesting, but not as ind-depth as one might wish. Nevertheless, check it out.

According to a sample ballot for Clark County, Nevada, candidates for office will be listed alphabetically.

The somewhat better news for Reid is that federal offices are listed ahead of state offices. Harry Reid’s son, Rory Reid, is running for governor and trails badly. I suspect that if voters vote against the first Reid, they’ll be inclined to vote against the second one, and vice versa.

Illinois voters say they would be negatively influenced if a candidate was endorsed by Barack Obama. And if his support isn’t an asset in his home state it’s hard to imagine where it is.

40% of voters in the state say they’d be less likely to support an Obama endorsed candidate to only 26% who say it would be an asset. The reality at this point is that Obama turns Republican voters off to a much greater extent than he excites Democrats. That’s reflected in the fact that 83% of Republicans say an Obama endorsement would be a negative with them while only 49% of Democrats say it would be a positive. Independents also respond negatively by a 38/19 margin.

We’re hearing a lot of talk about Obama being a one-term president, his presidency is over, etcetera, etcetera. Most of this is premature. But if Obama has become a political liability in Illinois . . . well, he’s really in the depths, and it’s quite possible he’ll never recover.

RECENT POSTS:
--Pondering Nevada’s Ballot Order . . .
--In Arkansas, Tim Griffin Clings to a 17-Point Lead
--Think of This Bad Poll for the GOP as a Palate-Cleanser
--An Obama Endorsement Hurts Candidates . . . in Illinois.
--Another Four Women Get Nods From Sarah Palin