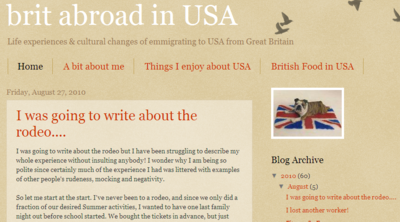 BLOG DESCRIPTION: My experiences as a British expat, rants, witterings, homesicknesses.... the things I love and the things I don't so love. My life as an immigrant in USA.

MY REVIEW: The author of this blog posts about once a week on average. Nevertheless, it's an interesting blog, to see how an immigrant to our shores from England views our culture and ways.

The author writes well, and has many interesting things to say.

So check it out!

So let me start at the start. I've never been to a rodeo, and since we only did a fraction of our desired Summer activities, I wanted to have one last family night out before school started. We bought the tickets in advance, but just hours before leaving, 3 different people mentioned animal cruelty at rodeos, so right off I was worried and didn't want to go. Quite honestly, despite my abhorrence of all things cruel, I assumed in this day and age there wouldn't be any animal abuse going on in such events so it didn't even enter my head when we bought the tickets.

Hubs said he had wondered why I wanted to go, but after a little talk we said we'd go since we'd paid anyway, and at the first sign of anything horrible we'd leave. In actual fact, most of it seemed okay (although I spent a fair bit of time in a queue for a root beer float for Son.)

What bothered me was some of the people. Now, I have written about rural life before. I meet some awesome people and on the whole, I love living in the country. It's quiet, we have space, we grow food. But at the same time, along with that comes a fair bit of ignorance and bigotry, which gets pushed aside as "just a joke," "don't be so sensitive" or "uh-oh, the P.C. Brigade are here!"

Well I guess that means I can't take a joke or I am part of the P.C. Brigade? But if I drop the "p.c." (a.k.a. manners and politeness) and reply in kind to the "jokes", I wonder if I'd just be told to "go back where I came from"?
Oh no one said that (this time), but I run out of fingers if I try to count the foreigner or immigrant jokes. Or the jokes about women, or city folk, or Democrats, or immigrants... oh I said that one already. Or jokes about foreigners that should speak English, or asking "where's your greencard?" if they hear an accent. Or if I counted the people chewing tobacco and smoking at the same time. With a baby on their arms. Or kids buying Confederate flags when they or their family have never been outside Pennsylvania (what's that about??)

I bit my tongue a fair bit. P.C or just polite? But you know, it bugs me because by being polite and not saying anything back, the offenders think that everyone agrees and so just carry on. Of course, any complaint just results: "It's just a joke. Don't be so sensitive." Maybe I shouldn't be. Maybe I should just join in, and for every immigrant joke thrown out, I should come up with a redneck joke.

The evening wasn't awful though, actually. We had fun. For the most part, I have learned to ignore these kinds of comments: I share them here solely to describe an experience and share that while many folk in rural America are really great, there's also an element that's as ugly in character as anywhere else. It's just harder to blend in if you're a minority and therefore harder to ignore the ugliness you sometimes encounter.