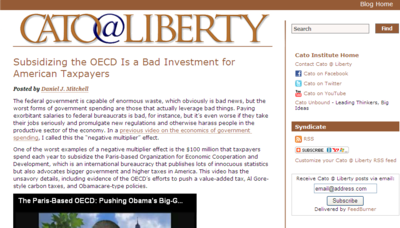 I like this blog a lot – most of the authors make a lot of sense. Several authors make posts here, so its updated several times a day. Each entry is well thought out and well-written, and sticks on point.

Well worth checking out.

FactCheck.org says that in an ad purchased with your tax dollars, actor Andy Griffith (a.k.a., the sheriff of Mayberry and Matlock) used a “weasel word” to mislead Medicare enrollees about how ObamaCare will affect them:

Griffith tells his fellow senior citizens, “like always, we’ll have our guaranteed [Medicare] benefits.” But the truth is that the new law is guaranteed to result in benefit cuts for one class of Medicare beneficiaries — those in private Medicare Advantage plans…

[T]he term “guaranteed” is a weasel word — a qualifier that sucks the meaning out of a phrase in the way that weasels supposedly suck the contents out of an egg. It may sound to the casual listener as though this ad is saying that the benefits of all Medicare recipients are guaranteed to stay the same — and that may well be the way the ad’s sponsors wish listeners to hear it. But what the administration is really saying is that only those benefits that are guaranteed in law will remain the same.

FactCheck.org neglects to mention that ObamaCare will weaken the guarantee behind those “guaranteed” benefits, too. Medicare’s chief actuary Richard Foster notes that ObamaCare ratchets down Medicare’s price controls, which will “possibly jeopardiz[e] access to care for beneficiaries.” That’s not to say that the old price-control scheme is any better than the new one. It just means that the Obama administration is being even less honest and more weaselly than FactCheck.org says.

And they’re dragging Matlock down with them.