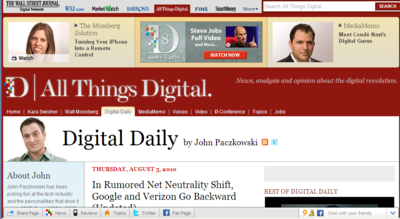 BLOG DESCRIPTION: All Things Digital is a blog devoted to news, analysis and opinion on technology, the Internet and media. Sassy, but also well sourced and accurate, All Things Digital offers lots of opinion and analysis, with plenty of fact as well.

Anyone who is a "techhead" or is interested in investing in such businesses will find this blog of interest.

SharePrint Warner Music Group (WMG) saw revenues drop last quarter, while losses increased. Meanwhile its digital business, which is supposed to be its growth engine, bumped up only 2 percent.

Warner has the same problem that the rest of the business has: For now, digital music is pretty much owned by Apple’s (AAPL) iTunes, and that business has been flattening out for some time, at least in the U.S.

Bronfman, speaking to analysts during Warner’s earnings call this morning, chose his words carefully: “Google has yet to make any announcements about its music plans, and I certainly don’t want to preempt those.” And for the record, I don’t believe Google has a deal yet with Warner or any other big music label yet.

But Bronfman and the rest of the industry certainly expect Google to get into music — most likely some kind of download store tethered to Android, perhaps coupled with some kind of cloud-based “locker” service. And the hope is that when Google does that, it will accomplish two things:

Provide the industry with a new revenue source and
Even more important, provide competition for Apple, and give the industry real bargaining power when it comes to setting terms with Steve Jobs.
It might even happen! Then again, it might not — the industry had similar hopes for Amazon (AMZN) when it got into digital music a couple of years ago. But while Jeff Bezos clawed a few share points, the market hasn’t fundamentally changed.

RECENT POSTS:
--Warner Music: We Can’t Wait for Google Music! (But We Can’t Say That Out Loud)
--Time to Go: Time Warner Set to Swap Out Magazine Boss Ann Moore
--Murdoch: We’re Not Giving Up on MySpace Yet