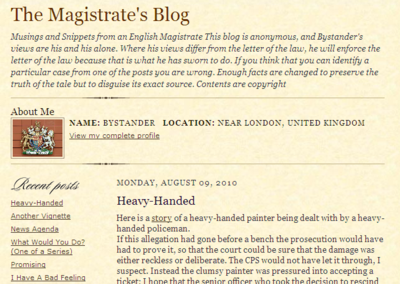 AMAZON SUBSCRIPTION LINK - USA: The Magistrate's Blog, by a Magistrate

[Note, blogs are now available for UK Kindle readers as well as US readers. Not quite sure how we're supposed to link to UK blogs, though! UK readers, just go to Amazon and do a search on that title if you're interested in subscribing.]

BLOG DESCRIPTION: Musings and Snippets from an English Magistrate.

MY REVIEW: I'm an American, but many years ago I had the wherewithal to go to England once or twice a year for about five years. Mostly I was in London, spending my time in West End theaters, but I also was in Oxford for three months, stood on Bosworth Field during the 500th anniversary of the death of the much maligned Richard III, and so on.

So now 20 years later I have to get my Brit fix by reading British newspapers nad watching BBC America and PBS's Mystery, as well as reading Brit msytery books.

So I subscribed to The Magistrate's Blog with interest, and indeed, it's very interesting, to see how the justice process works over in the UK - at least in this magistrate's city.

(For the benefit of my American readers, the definition of a magistrate is given at the end of this review. Basically, a magistrate is an unpaid position, but it's kind of like a judge for "relatively" minor offenses.)

Kindle readers in the UK will definitely enjoy this blog, as will those American readers who are also fans of the British Isles.

Note that there's a lot of terminology that Americans might not understand unless they're really up on their Britishisms (I suggest a course in reading the books of Sarah Caudwell). Also, once in a while the author will reference an article on a different website, then comment about it in his blog without summarizing it, so you have to click a link to go to the original article which is rather cumberson, IMHO.

Some Dream That Was!

I turned up at 9.25, and found myself sitting with two experienced and sensible colleagues. The clerk came out (another plus - she's really good) and told us that we had two trials listed, one morning, one afternoon. I didn't like the sound of a three-hour trial listed for 2 p.m. - too many things can go wrong and result in burning the midnight oil or going part-heard. The admin really shouldn't list these things, but it's all done at a remote courthouse these days.

10 a.m. arrived, out came the clerk; Crown not ready to go. Defendant here, defence brief here, CCTV suite set up for vulnerable young witness, but no witnesses (from the same family). Spent 20 minutes drinking coffee while CPS attempted to phone witnesses. We set a deadline to review matters. Five minutes before that, clerk comes out to tell us that the witnesses won't be here, as they have the date wrong and are expecting to come tomorrow. We troop back in. Prosecutor makes wordy request for adjournment, much of it repetitive and some of it teaching granny to suck eggs. I have a good idea of what the 'interests of justice' means, thanks, and I have a working knowledge of the Criminal Procedure Rules. I cut him short, and ask the defence for submissions - of course she opposes the application. As she gets into her stride and starts looking up case law, I stop her too after a whispered question to my colleagues. "We have heard enough, thank you. We refuse to adjourn the case. Enough is enough, it is now six months old." CPS offers no evidence, so I stand the defendant up and tell him that the case is dismissed. Does that mean I haven't got to come back?" he asks. "Yes, that's the end of it. You can go". He mumbles thanks and waves a sort of salute as he leaves.

This case was about a theft of a trinket valued at little more that £20, and had been going on since last winter. We gave it a decent burial.

We then heard that the afternoon case was also a goner, as the victim was away on holiday (booked after he knew the date of the trial, of course). Case dismissed.

We had some more coffee, dealt with a couple of short matters, then issued two warrants; one to search for documents used for fraud, and one Mental Health Act warrant to allow a squad of psychiatric workers accompanied by police to pick up an unstable paranoid schizophrenic and take him to hospital for assessment.

That was it. We juggled a couple of benches about to allow one courtroom to close; I volunteered for an early bath and I was back home by 12.30.

If you can't take a joke, I mused, you shouldn't have joined.

RECENT POSTS:
--Heavy-Handed
--Another Vignette
--News Agenda
--What Would You Do? (One of a Series)
--Promising
--I Have A Bad Feeling About This
--Careful!
--Ah So! Asbo!
--Cuts Yes - But Not Here
--Some Dream That Was!

In the courts of England and Wales, magistrates—also known as Justices of the Peace (JPs)—hear prosecutions for and dispose of 'summary offences' and some 'triable-either-way offences' by making orders in regard to and placing additional requirements on offenders. Magistrates' sentencing powers extend to shorter periods of custody (a maximum of twelve months, or fifteen months for consecutive sentences)

N.B.: Previously Magistrates could only sentence for six months for one offence and twelve months consecutively, though due to high public interest and media pressure on the courts, this was changed because many[who?] thought that certain offences that are heard at the Magistrates' court get given too lenient a sentence.[2], fines (maximum £15,000, previously £5,000), community orders which can include curfews, electronic tagging, requirements to perform unpaid work up to 300 hours or supervision up to 3 years and or variousother options.

Magistrates hear committal proceedings for certain offences, and can establish whether sufficient evidence exists to pass the case to a higher court for trial and sentencing. In more serious cases, Magistrates have power to pass 'either-way' offenders to the Crown Court for sentencing when, in the opinion of the magistrates, a penalty greater than can be given in the Magistrates' court is warranted. A wide range of other legal matters are within the remit of magistrates. In the past, magistrates have been responsible for granting licences to sell alcohol, for instance,[3] but this function is now exercised by local councils though there is a right of appeal to the Magistrates' court.

Magistrates are also responsible for granting search warrants to the police and some other authorities, therefore it used to be a requirement that they live within a 15-mile (24 km) radius of the area they preside over (the commission area) in case they are needed to sign a warrant out-of-hours. However, commission areas were replaced with Local Justice Areas by the Courts Act 2003, meaning magistrates no longer need to live within 15 miles (24 km), although, in practice, many still do. Section 7 of the Courts Act 2003 states that "There shall be a commission of the peace for England and Wales— . . . b) addressed generally, and not by name, to all such persons as may from time to time hold office as justices of the peace for England and Wales". Thus every Magistrate in England and Wales may act as a magistrate anywhere in England or Wales. (But see section 9 of the Official Secrets Act 1911.)

There are two types of magistrate in England and Wales: magistrates and district judges (formerly known as stipendiary magistrates) permanently employed by the Ministry of Justice (United Kingdom) (until May 2007, the Department for Constitutional Affairs). The first group (about 30,000 people), known as Justices of the Peace, sit voluntarily. According to requirements, around 50% of them are women, although the majority are seen as "middle class, middle aged and middle minded" and over 41% of Magistrates retired from employment while others may be self-employed or able to arrange leave from their employment.[citation needed] That said, there are those who recognise[who?] that three de facto jurors from the community may well have a more realistic understanding of local life than a single district judge whose background is in law rather than working in the wider community.

No formal qualifications are required but magistrates need intelligence, common sense, integrity and the capacity to act fairly. Membership is widely spread throughout the area covered and drawn from all walks of life. Police officers, traffic wardens and members of the armed forces, as well as their close relatives will not be appointed, nor will those convicted of certain criminal offences including recent minor offences. All magistrates receive training over a period of three months before sitting, carried out in conjunction with a mentoring program (mentors are magistrates with approximately 5 years service), which covers basic law and procedure and then continue to receive training throughout the first two years of their service and subsequently attend annual 'refresher courses.' Additional training is given to magistrates in the Youth Court, or those dealing with family matters. New magistrates sit with mentors on at least six occasions during their first year.

Magistrates are unpaid appointees but they may receive allowances to cover traveling expenses, subsistence and loss of earnings for those not paid by their employer whilst sitting as a magistrate. They are appointed to their local bench, (a colloquial and legal term for the local court), and are provided with advice, especially on sentencing, by a legally qualified Clerk to the Justices. They will normally sit as a panel of three with two as a minimum. Most are members of the Magistrates' Association, which provides advice, training and represents the approximately 30,000 magistrates to the Government. The Association also represents magistrates on the Sentencing Guidelines Council.[citation needed]