The Prudent Investor (business and investing) 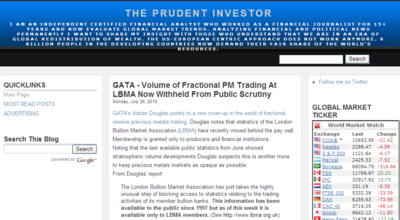 MY REVIEW: Because of the name, I was expecting this to be a blog for the small investor, but it seems to be more about economics than anything else. So, a bit over my head, I admit. For those who have the financial wherewithal to be interested in how the big boys play, this blog will be of interest to you.

GATA's Adrian Douglas points to a new cover-up in the world of fractional reserve precious metals trading. Douglas notes that statistics of the London Bullion Market Association (LBMA) have recently moved behind the pay wall. Membership is granted only to producers and financial institutions.

Noting that the last available public statistics from June showed stratospheric volume developments Douglas suspects this is another move to keep precious metals markets as opaque as possible.

The London Bullion Market Association has just taken the highly unusual step of blocking access to statistics relating to the trading activities of its member bullion banks. This information has been available to the public since 1997 but as of this week it is available only to LBMA members. (See http://www.lbma.org.uk)
I have recently written a series of exposes of the LBMA (see References 1 - 4 below) using the association's own data to show that the LBMA's bullion banks are operating on a "fractional reserve" basis. My analysis indicates that the bullion banks are holding only 1 real ounce for about every 45 ounces of gold that they have sold, a reserve ratio of just 2.3 percent.

At the March 25 public hearing of the U.S. Commodity Futures Trading Commission on precious metals futures markets I cited the LBMA's own statistics to label the "unallocated gold" accounts of the bullion banks as a Ponzi scheme. (See Reference 3 below.) There were bullion bank representatives at the hearing but no one expressed an objection. That hearing was videotaped and posted at the CFTC's Internet site but the bullion banks have not made any public statement rebutting what I said. In fact at that hearing Jeffrey Christian, CEO of the CPM Group, acknowledged that what is widely called the "physical market" is in reality a largely "paper market" trading gold and silver as if they are financial assets and not physical metals. Christian stated that 100 ounces of paper gold are traded for every 1 ounce of physical gold.

When the LBMA first made its trading statistics available in January 1997, observers and analysts were shocked. (See Reference 5 below.) No one could reconcile the statistics with other market data, nor comprehend how the bullion banks could be trading on a net basis more than 240,000 tonnes of gold annually while the global mine output was only 2,400 tonnes.

Over the years the furor over these statistics had subsided until the end of 2009, when I commenced writing about my studies, showing that the statistics can be reconciled with other market data if the bullion banks are operating a fractional-reserve bullion banking operation with a recklessly low reserve ratio. I have also shown how the price of gold is suppressed because 45 ounces of demand are being diluted to result in purchase of only 1 ounce of real metal. If instead all 45 ounces were to be sourced and purchased, the gold price would be multiples of the current price.

Typically when people are exposed in a scandal their first reaction is a cover-up. The most notorious examples of this are the Nixon administration, when it doctored the Watergate tapes, and Arthur Anderson, which shredded millions of pages of documents relating to audits of Enron Corp.

The LBMA has now commenced a cover-up with respect to the gold trading activities of its member bullion banks, withdrawing statistics from the public domain.

This appears not to be the only cover-up going on in the gold market.

For years the International Monetary Fund has made great fanfare of its mere contemplation of selling some of its gold, and actual sales by the IMF have been widely publicized. Since February the IMF has been surreptitiously selling large tonnages of gold each month, but these sales now are to be found only by digging through the IMF's financial statements, and even there the recipients of the gold are not disclosed. (See Reference 6 below.) One has to wonder why the IMF now is trying to fly under the radar with its gold sales.

Similarly it was recently discovered that the Bank for International Settlements didn't feel it necessary to announce its involvement in the largest gold swap in history, 346 tonnes. (See Reference 7 below.) The BIS swaps instead were discovered only because a market analyst dug through the footnotes of the bank's financial statements.

These developments have all the hallmarks of cover-ups.

In June the LBMA trading statistics showed that in May 2010 the average net daily trading in gold by LBMA member banks jumped a massive 50 percent from the month before to 24 million ounces each day from 16 million ounces each day. That translates to $7.5 trillion annually. If an operation is running on a razor-thin fractional reserve basis, such step changes are often fatal.
It appears that a run on the bullion banks has commenced.

Concealing Trade Information
There is a cover-up of back-door injections of liquidity of physical gold, and the LBMA now is trying to conceal trading information.

There has been much debate about how investors, politicians, and regulators didn't see the 2008 financial crisis coming, and lack of transparency was cited as a key reason. Clearly those who have been manipulating the gold market are trying to skulk deeper into darkness. They have a lot to hide.

Investors could have been blindsided by the events of 2008, but anyone who misses the writing on the wall about what's going on in the bullion markets is just foolish. The bullion banks have sold far more metal than they can deliver, and more and more customers are asking them to deliver. This has led to back-door bailouts and cover-ups.

Anyone who has "unallocated" bullion should be very concerned. The LBMA itself describes owners of "unallocated bullion" accounts as "unsecured creditors." That means that the account holder has no collateral or title to any bullion.

Bullion bank unallocated account agreements require the bank only to settle in cash for non-performance. That means when the physical squeeze that is evolving takes gold and silver prices to multiples of the current price, holders of unallocated metal accounts will not get any bullion, nor will they be compensated at the prevailing market price.

I interpret the LBMA's move to secrecy as a sign that the opportunity to get real metal is closing fast.