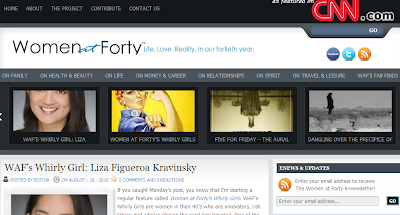 BLOG DESCRIPTION: From call centers in India, to fading automobile factories in America, women everywhere, as they have since the beginning of time, are turning forty this year, and they all have a story. The Women at Forty Project wants to chronicle these stories. We aren't about telling you what forty should look or feel like, we want you to tell us what it’s really like. Whoever you are, wherever you are, if you’re forty, we want to hear your story.

MY REVIEW: I enjoyed this blog, perhaps because they're profiling the Whirly Girls (women helicopter pilots).

Other than that, I really don't care for the arbitary age of 40. Are there still women today who think turning 40 is so horrible? Do they always want to stay 39, like Jack Benny? (For myself, when I was in my 30s I told people I was 40, now that I'm in my 40s I tell people I am 50, and when I get into my 50s, I will tell people I'm 60. (Of course, it's because I dont feel like doing the math to figure out how old I really am, but also, it serves to make people tell me I look really good for my age!)

Of course now 30 years later I'd give a great deal to be able to go back in time, and know what I know now. I would do things so differently.

That's the catch-22 of course. Looking back at myself at age 16, at age 20, if someone had said - "learn from other people's mistakes," I probably would have ignored them, just like the people to whom I give advice today (my 13-year old nephew to be precise) pay no attention to me.

All that's a long-winded way of saying, read this blog!

Women are starting small business at twice the rate of men, 10.6 million firms are at least 50% owned by a woman or women, and women-owned firms employ 19.1 million people and generate $2.5 trillion in sales annually*. Behind these facts and figures are the names and faces of women, just like many of us, who had a vision, and despite of – and sometimes because of adversity- are finding ways to make their dreams reality.

One of the unexpected benefits of launching The Women at Forty Project has been meeting some of these very women. I’ve been so inspired by them that I’m launching a new series in our Money & Career section called Women at Forty’s Whirly Girls. The term “Whirly Girl” refers to the elite group of less than 1,700 female helicopter pilots in the world. For me the term represents women who are innovators, risk takers and who’ve chosen the often bumpy, usually risky, road less traveled.

Over the next few weeks I’ll be introducing you to women in their 40’s who are doing just that. From an award winning musician and documentarian whose dream career began only after being fired, to a TV producer forced to start her own business after being struck with a debilitating disorder, these women represent the strength and determination that has come to personify 40. (Photo: 1942’s Rosie the Riveter) We’ll even get to meet a real life Whirly Girl, Angie Griffin, chief pilot and owner of Dragonfly Copters Tours. Many of these women are beyond their 40th year, but they all very clearly recall experiencing a major shift at 40. Whether it was an inexplicable surge in creativity or making life changing decisions, for them, 40 was a very significant year in their lives.

Over on the Facebook page my quote to start the week was “The first step towards getting somewhere is to decide that you are not going to stay where you are.” Women at Forty’s Whirly Girls all decided they weren’t going to stay where they were. Their stories can serve as inspiration to all of us with dreams and desires we might be afraid to step out on. There’s a reason Robert Frost writes about the road less traveled by. Taking that road requires more courage than fear, more faith than doubt and a ‘sticktuitiveness’ that’s forged by fire. Sounds like the perfect job for a Women at Forty. Liza Figueroa Kravinsky, the filmmaker and musician whose interview I’ll run on Wednesday, may have said it best. When I asked her about the unconventional, often unpredictable, non-9-5 path she’d decided to take, Liza simply said, “It’s not comfortable, but it’s worth it.”

Are you a Whirly Girl? If you’ve set out on the road less traveled by, or know someone who has, email your story to contribute@womenatforty.com. It could end up featured in a future Women at Forty Whirly Girl post.