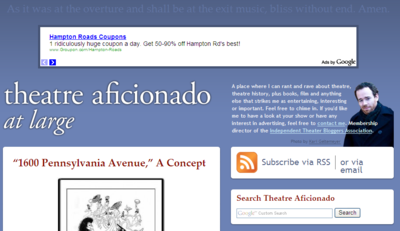 BLOG DESCRIPTION: Just a place where I can rant and rave and be a total lunatic about theatre, film and anything artistic that strikes me as entertaining, interesting or important.

MY REVIEW: Anyone who is a theatre lover will enjoy this blog. It's much more than reviews of plays or musical theatre (though we get those too), it's also a stroll down memory lane to great productions of the past, something ony someone who has been there could write.

Daly knows whereof he speaks, he writes well, informatively and entertainingly, and I highly recommend this blog.

(Sometimes he shares videos of great performances - actors reprising their roles at the Tony awards, for example - which Kindle viewers can't see.)

“The play is presented as a rehearsal and takes place on a bare stage against a neutral backdrop, with perhaps one or two masking legs on either side.

During the play the facade of the White House as it changes through the years appears in the dark behind the drop as if suspended in mid-air.

Whenever possible, the actors enter from and exit to rehearsal benches on either side of the stage.

The time of the rehearsal is the present.

This is an excerpt from the first page of a 1975 draft of 1600 Pennsylvania Avenue, in which librettist and lyricist Alan Jay Lerner establishes his well-intentioned conceit for the show. It all sounds well and good but we know how it all turned out – an unfortunate footnote in Broadway history. One hundred years of the White House and race relations, with a passing resemblance to Upstairs/Downstairs presented as a musical comedy with music by Leonard Bernstein. Why am I fascinated? Because there is so much that is good, but no basic structure or clear understanding of the underlying concept. Lerner wanted to use the conceit of the musical play being a show constantly in rehearsal, but there was so much history going on that the concept muddied the presidential pageantry with what seemed like two or three musicals happening at the same time. Lerner wanted the actors to step out and comment on the nation’s racial situation during and between scenes, but it was a promising idea left unfulfilled.

The draft contains many lines and situations which we will be a part of the final musical product (either in Philadelphia or New York). The through line for the family of servants is in place, as well as most of the presidents. Interestingly enough, there was a lot more material for the First Lady in the first version, but the “Duet for One” was not yet conceived. That moment was part of a transition song for the President to sing in the second act while talking to his servant Lud. His lyrics about the Hayes election were incorporated into the future, but glossed over much of the overall presidential history.

Already there is trouble. How do you decide which presidents are the most important, especially in terms of racial America? And of course, what about the other troubles of the first hundred years of the White House? Washington appears at the top, skips Adams (leaving that scene for Abigail) into Jefferson without much in the way of lucid transition. It’s confusing just to read one scene go into the next, because the stage ideas are half-baked, musical numbers left unfulfilled – though there are some which were performed without any changes from this draft. Going into the presidents, their relationship with the wives and then also the household servants, there is little room for the theatrical metaphors, which get lost along the way and brought up in arbitrary moments. It was in this part of the gestation that a call should have been made regarding whether or not the concept was even necessary. There are passing references to Mrs. Adams, who is easily the most fleshed out of the Presidents or First Ladies, becoming a ghost (!) but again, the ideas aren’t fleshed out and lack specificity. For what it’s worth though, the dialogue in this draft is better than most of the horrid lines heard in the final Broadway version. Ultimately it becomes a Presidential revue masquerading as a serious musical play.

But for me it comes back to that score, with its brilliant use of American musical idioms and Leonard Bernstein’s variations on patriotic numbers to create his score (including citations from “Hail to the Chief,” “Yankee Doodle” and “To Anacreon in Heaven,” which was adapted for our National Anthem. The overture, which played on Broadway, is – I think – worthy of the concert stage. The result is an eclectic musical style, with marches, waltzes, cakewalk, calypso and even a minstrel show reflecting on or commenting on the relations between Black and White America. (The minstrel show was met with a chilling reception resulting in booing and walkouts, which is also why I’m curious to see The Scottsboro Boys). The enterprise is done in by the lofty ambitions of Lerner’s script, which was eviscerated by the time the show opened at the Mark Hellinger Theatre.

I do wish that one of these days, someone might (to steal from Hugh Wheeler) find a coherent existence after so many years of muddle. The show failed, the score was swept under a rug without a cast album. But there are folks who wouldn’t let it be forgotten. Tapes of the show from its various incarnations exist in certain circles, and provide interesting insight into the show that just wasn’t there.

In 1997, A White House Cantata, a concert showcasing highlights from the score, was the final result of several attempts at revision. However, as I’ve stated before, I don’t feel that classical piece should be the final word. I do wonder if the Bernstein and Lerner estates would be interested in ever resuscitating the original piece for a complete studio album – with Broadway actors. In spite of the critical evisceration of ’76, what remains is the score and that is, in this case, the thing. A CD is available of A White House Cantata featuring Thomas Hampson and June Anderson. Conducted without feeling by Kent Nagano, the item is really for serious collectors only. It’s drained of anything close to color and life, mired in classical pretensions (particularly whenever Anderson tries to be funny).

In related news, some numbers from the score have been published for the very first time. “Take Care of This House” was, for many years, the only number available. The vocal selections which were printed by the Music of the Times Publishing Corp. were available for a short period of time and while incredibly rare, copies are available for perusal in the NYPL stacks. However, the mammoth soprano showcase, “Duet for One” was not included. It is now available for all those daring sopranos out there, published this summer as part of the new three book collection “Bernstein Theatre Songs” (in the high voice selections). If “Glitter and Be Gay” is florid coloratura, “Duet for One” calls for more incisive acting as the soprano involved must create two characters, alternating mezzo and soprano, oh and cap it off with a D above high C. It is one of the most satisfying numbers I have ever seen in performance.

1600 Pennsylvania Avenue will never be a great musical, and is likely to never be revived, etc., but it is a score of considerable merit and one which I think all serious musical theatre fans should know.