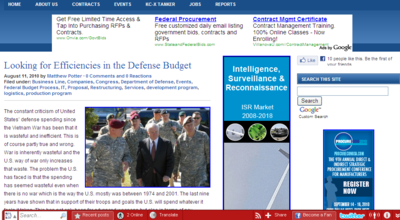 BLOG DESCRIPTION: Defense Procurement News is one of the webs fastest growing sites dedicated to discussion of the defense industry. The site is read daily by government and industry insiders. It provides an independent review of major contract awards as well as developments in the international arms industry. We utilize our contacts in media and industry to write about what is happening now across the business of defense contracting. www.defenseprocurementnews.com covers the significant developments of an industry that spends hundreds of billions a year.

MY REVIEW: This is a particularly fascinating blog if you're interested in the US military and what's being bought and sold. (I dont' know that I like the fact that this is on the web, as everyone around the world can read it including people whom we don't really want to know our defense business - on the other hand, there are so many sources where they could find out this stuff, what does it matter?)

The caveat? Well, it doesn't seem that all the blog entries at the actual website are transferred over to the Kindle blog. I compared the several days worth of posts on my Kindle with those archived at the site, and there were quite a few I hadn't received. Not quite sure what's up with that.

Nevertheless, check it out.

The constant criticism of United States’ defense spending since the Vietnam War has been that it is wasteful and inefficient. This is of course partly true and wrong. War is inherently wasteful and the U.S. way of war only increases that waste. The problem the U.S. has faced is that the spending has seemed wasteful even when there is no war which is the way the U.S. mostly was between 1974 and 2001. The last nine years have shown that in support of their troops and goals the U.S. will spend whatever it feels it takes. This has not only been for advanced weapons but also in terms of pay, benefits and care for military members and their dependents.

Secretary of Defense Robert Gates announced this week several initiatives to reform defense spending to make it more efficient and to free up money for investment in weapon system development and acquisition. Much of this will come from eliminating what he feels is duplicative capability in organizations, personnel and support assets. At the same time he will attempt to wring more money out by eliminating “support contractors”. Those ubiquitous and slightly evil people who work side-by-side with the troops and civil servants who must be providing services that at some time were thought necessary.

Gates not only wants to eliminate a whole four star command, Joint Forces Command, but several dozen other generals and senior executives. He just doesn’t want to reduce the size of the contractor force — by thirty percent over three years — but also the number of civil servants by freezing employment of the OSD staff which he controls.

In theory he should be able to remove this number of people without affecting the capability of the armed forces but until he does it we won’t know the actual effect. Joint Forces Command is responsible for training and developing doctrine to make it easier for the four U.S. military forces to fight together. Perhaps they have improved this but perhaps they have not? Until they are gone the force multiplier they provide through reduced friction (as Clausewitz would say) cannot be understood. The same may be said about the contractors. True there may be a budget analyst or help desk person at Redstone Arsenal (RSA) that don’t affect the ability to put a round on target in Kandahar but the contractor moving a box of ammo onto a ship or aircraft or repairing a radio at the depot certainly do. The ones at RSA may also help get the newest targeting system or ammunition developed, produced and fielded rapidly.

You have to give Gates credit for trying. His cuts to major weapon systems in the last two budgets have done well in Congress. These kind of cuts may be harder. The plans he announced are already receiving push back from Congress, some contractors and the organizations that represent them. There are also those praising the moves as a way to reduce bureaucracy and improve contracting practices and costs.

Virginia especially is complaining as they will be hardest hit with the elimination of Joint Forces Command in Norfolk and the thousands of contracting positions that must go to reach the ten percent goal many who work in Northern Virginia. In the Nineties the “Peace Dividend” led to the reduction of civil servants working at the military depots and support facilities. Many of these jobs have been replaced by contractors, who now presumably will see their jobs cut.

As with all budget moves it will be up to Congress to agree with Gates and push through these reforms. There are good chances as with his cuts to weapon systems he will get some of what he wants. Whether that will save money in the long run is yet to be determined.