The History of the (Whole) World (history, writing) 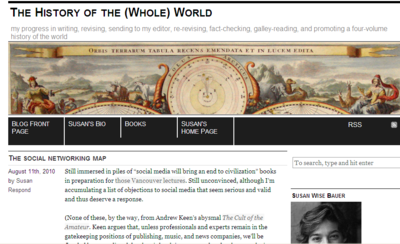 AMAZON SUBSCRIPTION LINK: The History of the (Whole) World, by Susan Wise Bauer

BLOG DESCRIPTION: My progress in writing, revising, sending to my editor, re-revising, fact-checking, galley-reading, and promoting a four-volume history of the world...along with reflections on life as a writer/parent/amateur farmer.

MY REVIEW: There are two types of author's blogs - both of which I find interesting to read. There's the aspiring authors - the ones who haven't been published yet and who take you on their journey to be published. And there are those that have been published - a lot - and tell you what it's like from that perspective.

Susan Wise Bauer has been published, a lot, and is doing all the things that professional authors do to promote their work - going on lecture tours, etc., while continuing to write yet more books.

When young, I used to devour fiction and ignore non-fiction. Now that I'm old, I regret the years wasted in that regard...oh, the fiction was enjoyable, but the knowledge contained in non-fiction books... that's what's necessary in the world today.

From my point of view, Mr. Freud, it makes a BIG difference.
July 30th, 2010 by Susan
In preparation for those Vancouver lectures I mentioned in an earlier post, I’m working my way through a raft of books on technology and society. Which means you’re going to hear about them in this blog. A lot.

I went back this past week to reread Neil Postman’s 1992 Technopoly: The Surrender of Culture to Technology; it’s one of the core reflections on this topic, and even if you disagree with Postman you can’t ignore him. (I’ve got to go back and reread Jacques Ellul as well.)

I first read this book years ago. Maybe fifteen years. Starting into it again, I was brought up short by this section, which I don’t remember from my first reading.

…Technophiles….gaze on technology as a lover does on his beloved, seeing it as without blemish and entertaining no apprehension for the future. They are therefore dangerous and are to be appraoched cautiously. On the other hand, some…such as I (or so I am accused), are inclined to speak only of burdens…and are silent about the opportunities that new technologies make possible. The Technophiles must speak for themselves, and do so all over the place. My defense is that a dissenting voice is sometimes needed to moderate the din made by the enthusiastic multitude…For it is inescapable that every culture must negotiate with technology, whether it does so intelligently or not. A bargain is struck in which technology giveth and technology taketh away. The wise know this well, and are rarely impressed by dramatic technological changes, and never overjoyed. Here, for examples, is Freud on the matter, from his doleful Civilization and Its Discontents:

One would like to ask: is there, then, no positive gain in pleasure, no unequivocal increase in my feeling of happiness, if I can, as often as I please, hear the voice of a child of mine who is living hundreds of miles away or if I can learn in the shortest possible time after a friend has reached his destination that he has come through the long and difficult voyage unharmed?? Does it mean nothing that medicine has succeeded in enormously reducing infant mortality and the danger of infection for women in childbirth, and, indeed, in considerably lengthening the average life of a civilized man?

Freud knew full well that technical and scientific advances are not to be taken lightly, which is why he begins this passage by acknowledging them.

So far so good. But let us continue:

But [Freud] ends [the passage] by reminding us of what they have undone:

If there had been no railway to conquer distances, my child would never have left his native town and I should need no telephone to hear his voice; if travelling across the ocean by ship had not been introduced, my friend would not have embarked on his sea-voyage and I should not need a cable to relieve my anxiety about him. What is the use of reducing infantile mortality when it is precisely that reduction which imposes the greatest restraint on us in the begetting of children, so that, taken all round, we nevertheless rear no more children than in the days before the reign of hygiene, while at the same time we have created difficult conditions for our sexual life in marriage?

At this point I had a series of related reactions which I scribbled in the margin of the book. They went something like this:

Hold the phone. Freud just said: If one technology reduces infant mortality at the same time that another technology lowers the birth rate, the technologies cancel each other out because we end up with the same number of children at the end of the day.

In other words, Freud dismisses nine months of pregnancy, labor, and delivery as unimportant. And even more appalling: he does not give any weight at all to the emotional anguish of giving birth to a child, loving it, and watching it die.

I cannot imagine a woman writing this. (“If you end up with four children at the end, having a dozen babies and watching eight die is the same as having four pregnancies.”)

Even more startling to me is Postman’s quoting it as a perfect example of understanding both the benefits and drawbacks of technology. Did he not hear Freud’s voice, pointing out that it’s better to have an unfettered sex life and lots of children, even if some of them die, than to “create difficulties” around sex and lower the birth rate? (Okay, to be fair to Freud, he did say “in marriage.” But still.)

Would a woman, writing about technology and American civilization, quote Freud in this way? Surely not.

And now that I look at the twelve highly-recommended books about technology and American society sitting on my to-read shelf, another question occurs to me. Why are they all by men?

(By the way: recommendations for titles on this topic, written by women, would be much appreciated.)

(A bit of the author's bio:

Susan’s most recent book for Norton, The History of the Medieval World: From the Conversion of Constantine to the First Crusade (2010) is the second in a four-volume series providing a narrative world history; the first volume, The History of the Ancient World: From the Earliest Accounts to the Fall of Rome, was published in 2007. Her previous books include the academic title The Art of the Public Grovel: Sexual Sin and Confession in America (2008), published by Princeton University Press, and The Well-Educated Mind: A Guide to the Classical Education You Never Had , a guide to reading the classic works of fiction, poetry, history, autobiography, and drama (Norton, 2003).

Norton also published The Well-Trained Mind: A Guide to Classical Education at Home (with co-author Jessie Wise); originally published in 1999, this bestselling guide to education in the classical tradition was revised and updated in 2004 and again in 2009. Susan has written a four-volume world history series for children, The Story of the World, published by Peace Hill Press (Volume 1, Ancient Times; Volume 2, The Middle Ages; Volume 3, Early Modern Times; and Volume 4, The Modern Age). She is currently at work on The Complete Writer, a K-12 writing program for home educators and private schools. Susan is also a contributing editor of Books & Culture and is preparing a lecture series for The Teaching Company.