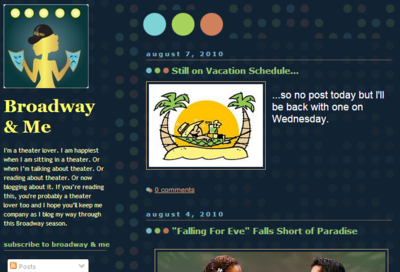 MY REVIEW: The author posts at least twice a week - except this summer when she's averaging once a week.

Here's the author's bio: Jan, a lifelong theater lover, is the former Arts editor for TIME Magazine. She was also a contributing editor for the still-much-missed TheaterWeek magazine. She currently teaches arts reporting at the City University of New York’s Graduate School of Journalism and, of course, is married to the longtime pit musician K. The FTC also requires you to know that she is a member of the Advisory Committee of the American Theatre Wing, the Outer Critics Circle and the Independent Theater Bloggers Association. This means that, like professional critics, most of her theater tickets are comped but she promises that her comments in the reviews you read here are in no way compromised.

Fair warning: the remarks you’re about to read are going to sound sexist. So I apologize in advance. But last week I caught up with Falling for Eve, The York Theatre Company’s new musical retelling of the Adam and Eve story that is ending a three-week run at the Theatre at St. Peter’s on Aug. 8. A few minutes into the show, God (confusingly played in alternate scenes by male and female actors) creates Adam. And that's when Jose Llana appears, his back to the audience, but totally naked. “Yep,” I thought as he turned around and I ogled his perfect pecs, six-pack abs and come-hither thighs. “When God created man, this is definitely what he had in mind.”

And now that I’ve gone this far, let me be an equal opportunity offender: Krystal Joy Brown, who played Eve (she’s being replaced this week by Stephanie Umoh), is no slouch in the great body department either. On the way home, instead of humming the music, I tried to imagine what the casting sessions must have been like.

It’s not that the songs by Bret Simmons and David Howard are bad. I got a kick out of their list song "Good Things Are A-Comin,” which manages to squeeze the pop cultural history of the world from the Creation to the Obama Administration into three minutes. And some of their pop-flavored ballads are nice too. In fact, the entire show, as directed by Larry Raben, is sweet—in a freshman-class musical kind of way.

All six cast members (in addition to the original First Couple and the dual deities, two angels provide the comic relief) are enthusiastic, ethnically diverse in a way that you seldom see in a show that doesn’t center around race and several of them, particularly Brown, have great voices. Beowulf Boritt’s set is intentionally and amusingly tacky. And I’ve nothing but praise for Bobby Pearce’s costumes, even though that’s solely because he keeps Llana in a loincloth.

But Falling for Eve’s calling card is that its book is by Joe DiPietro who just won two fistfuls of Tonys for Memphis. This new book, based on a play written by the show’s lyricist, does come up with some original twists on how Paradise got lost. For instance—and there are spoilers at the end of this sentence—the snake is M.I.A. and Eve is a girl-power gal who can make her own decisions and pick her own fruit, while Adam is more of a slacker dude.

Still, the bottom line is that DiPietro once again has something to say about love, self-determination and the price one has to be willing to pay for them. But this time out he’s so eager to please that he ends up condescending to the audience with weak jokes that flaunt their anachronisms.


Falling for Eve is essentially a situation comedy and too little of the humor comes from the situation itself. The show dragged more often than it should have in 90 intermissionless minutes. Although I didn't so much mind since it gave me more time to gaze at Llana, whose heavenly physique is as close to paradise as this show gets.