The Jawa Report (news and political opinion, War on Terror 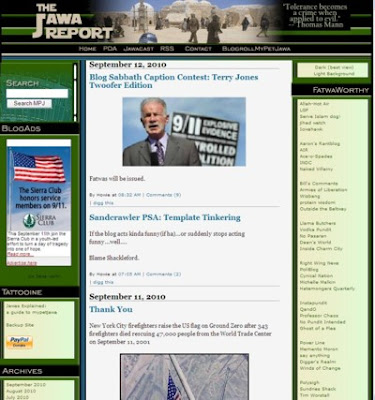 REVIEW: This is an interesting blog, chronicling the lack of tolerance people in majority-Islamic countries have for the Christian minorities in their midst, as well as news about 9/11, the war on terror, etc.

Problems are that lots of posts consist only of a headline and an embedded Youtube video, which of course Kindle users can't see. And occasionally a news headline is given, but you must click on a link to go to a webpage to read the actual article.

So, check it out via the two-week free subscription, and compare it to the actual website, to decide if you'd like to maintain a subscription or find the blog of interest.

When this story was first reported, the media described it the way it always describes Coptic persecution at the hands of Muslims -- as a "sectarian-clash." As this more revealing report makes clear, however, it was anything but a "sectarian-clash" (which suggests Christians and Muslims, in more or less equal numbers, fighting and rioting). Instead, a Muslim set a Christian on fire, and then other Muslims attacked his father, stabbing him to death -- this in a village where Christians make up maybe 3-4% of the total population. Keep this in mind the next time you hear about "sectarian clashes" occurring where Muslims predominate and non-Muslims live as minorities.

But but but...... using Copts as kindling is just a cultural thing. The Koran clearly states that building a fire using the People of the Book is like totally wrong or something.
[This post was made a week ago, quoting an event that happened last year.]
RECENT POSTS
--Blog Sabbath Caption Contest: Terry Jones Twoofer Edition
--Sandcrawler PSA: Template Tinkering
--September 11, 2010 Thank you to firefighters
--Nine Years
--Iran Launches 2,000 Blogger "Cyber War"