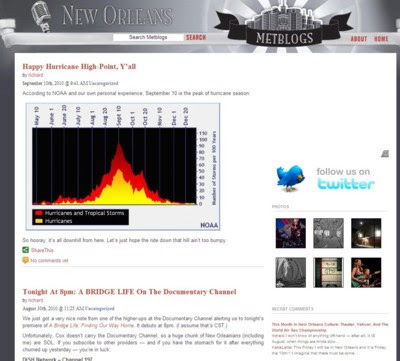 BLOG DESCRIPTION: Written from the perspective of people who live, work, and play here every day, Metroblogging New Orleans is one of over forty-five (and growing) blogs in the globe-spanning Metroblogging network. Get comfortable and have a look around if you'd like to know more about New Orleans, and have a peek at the authors who share their New Orleans experiences with you.

MY REVIEW: An interesting blog. Unfortunately, it seems to be updated once a week or once every 10 days only, but then, that's the joy of having a subscription via Kindle, you don't have to worry about checking the blog every day, because it'll be sent to you when it's finally updated.

If you're interested in how the city is holding up 5 years after Katrina, and now how they're doing thanks to the BP oil leak (and let us not forget, as they seem to do, that the US goverment is the one dispersing claims money, not BP) you'll find this an interesting blog.

Five Years After Katrina, Five Lessons Learned
by richard August 29th, 2010 @ 5:45 PM Uncategorized
When things were still in chaos; when the streets of Lakeview and the Lower Ninth were drier but not dry; when all we knew about our city came from fifth-hand reports of neighbors who’d stayed or first-hand reports by journalists who’d just arrived; when no one was in charge, right before everyone was in charge: then they broke the news. And the news was this: things won’t be normal in New Orleans, not for a while. Five years, maybe ten.

“Five years?” some gasped as they shoved soggy remembrances into cars and U-Hauls, rushing to move on with their lives. “Five years?” others shrugged, happy to have something to look forward to, an endpoint, no matter how elusive. The thought of half a decade became a dividing line: the patient and the rooted dug in, while the overwhelmed, the anxious, and the helpless surrendered to the fact that their migration was permanent.

As it turns out, five years hasn’t been enough time for recovery, except in places where it has. In certain parts of the city — some rich, some poor — life resumed its usual pace within a few months. In other areas — some poor, some rich — people still check the mail with crossed fingers, hoping for insurance settlements so they can rebuild what the floodwaters spared. But for a tragedy this broad, this pervasive, this everywhereyoulook, there is no normal, only “normal”. It is the same as before, but different: a life made special because we’ve come through it with scars of varying size and shape.

Some would like to go back, to inhabit that pre-Katrina world that was always a gamble anyway, but most of those people live elsewhere now — theoretically safer places like Atlantadallasnashville. Many others, myself included, refuse to budge. Us, we look to our unofficial patron saint, Lafcadio Hearn, who crafted our unofficial novena 130+ years ago:

Times are not good here. The city is crumbling into ashes. It has been buried under a lava flood of taxes and frauds and maladministrations so that it has become only a study for archaeologists. …But it is better to live here in sackcloth and ashes, than to own the whole state of Ohio. (1879)

With all due respect to the good people of Ohio, of course.

We have learned so much in these five years, so much that we can share with others affected by calamity, so much that those from other places — Kobe, Istanbul, Amsterdam — once tried to share with us, only we couldn’t hear them. We can’t be guaranteed that anyone will listen to us either, but we’re obligated to write.

And so: some not-so-simple rules for surviving disaster.

This is the easy one. Anyone can see superficial havoc after it’s been wreaked by earth, wind, air, or fire. Anyone can grasp the complicated baby steps of rebuilding infrastructure. Roads, homes, doorways: all means of communication are fragile, and there’s no guarantee that you and your neighbors will be at the top of the government’s priority list. Your electricity and drinking water could be restored in three weeks or maybe four, but don’t bank on it.

And it gets worse: the warrens of bureaucracy. Permits, grants, insurance claims, and lawsuits all take time and paperwork. You will be told five different things by six different people. There will be a surge of information and a void of it, all at once. If you’ve ever been to the DMV, you’ve seen the tip of the iceberg (which is itself another potent symbol of things gone terribly, terribly wrong).

Your response: patience and more patience. And watch what you eat. Lots of us still carry ten extra pounds thanks to stress-snacking.

2. EXPECT WORSE THAN THE WORST

After the obvious problems come things you hadn’t expected. Depending on the tragedy, you may have already lost loved ones. But beyond that — yes, there is a beyond that — you will lose even more. You will lose friends and family who cannot be there, cannot walk the same streets, the same hallways, the same gardens they did before, because they don’t have the time, will, energy, or means. They will leave, and you will have to navigate a new, unfamiliar landscape with fewer shoulders at arm’s reach.

As they shuffle off, other tragedies will befall you. Bills, unseen physical damage, crime: the world will be a closet of boogeymen, and some will escape, even in broad daylight.

Your response: grief and slow acceptance. And a lot more patience.

3. EXPECT LITTLE FROM YOUR LEADERS

There will be many, many people vying for a turn at the podium. Far more will stand behind them, one eye on their fearless leader, the other checking the TV monitor to gauge how much screen real estate they’re getting. There will be a lot of talk and some action.

There are exceptions to this rule, but they aren’t common. Rudolph Guiliani comes to mind. He wasn’t perfect, but he did what leaders must do, what they are meant to do, especially in the face of disaster: he was compelling. He was a figurehead. He was a champion, around which the people of New York — the nation, the world — rallied. Maybe the extraordinary circumstances of September 11, 2001 made Mr. Guiliani stand out, excel. But then, every disaster is extraordinary to the people who live through it.

Your response: organize, communicate with neighbors, and make yourself be heard. Shout, but shout in chorus.


Some — mostly those living far away, mostly those who go to sleep with full stomachs in warm beds, who have never known another life — some of those people will attack you. They will accuse you of expecting handouts and of expecting others to come to your rescue. They will ridicule you for being lazy, for not being prepared, for playing with fire. This is especially true in America, where Calvin and his work ethic still work hard, except on the Sabbath.

They will blame the victim: “You live on a fault line, what did you expect?” Which is, in fact, the same as asking, “Your skirt was too short, what did you expect?” But humans aren’t always prudent or rational, and that’s partly what makes us human. What’s more, and what these people forget, is that no place is truly safe apart from a presidential army bunker. And would even the president want to live there?

There will also be interlopers, people who come to help. Most will have their heart in exactly the right spot, but some will tell you that you’ve been doing it wrong all along and their way is better. Which is one letter away from bitter.

5. EXPECT THE BEST OF YOUR NEIGHBORS

Or maybe don’t “expect”. But don’t be surprised when it happens. Those next door will step up to the plate and organize. Those across the country will offer comfort and support. They will fill the gap left by the boutonniered politicians at the podium and mend the wounds caused by detractors.

Some of you may not believe me. And that’s fine, be pessimistic if you like. But here’s the thing, the Very Big Thing: humans are social, and when there’s a rip in the social fabric, we tend to get out the needle and thread. Laugh all you want at that terrible metaphor, but what’s underneath it is true.

Your response: live up to your end of the bargain.