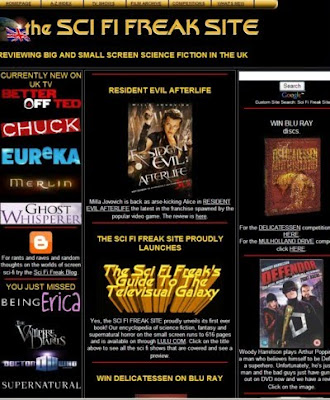 MY REVIEW: I love the Sci Fi Freak website. There are reviews of dozens of SF TV shows and movies - including British ones that we across the pond have never seen, and its fun to read about what we're missing, and there's also lots of review of movies. [The only area where they fall down is the BBC Radio SF dramas - like Simon Bovey's work - no mention of them anywhere that I could see.)

The blog is a different story. As you see from the list below, there have been 20 posts total for the entire year of 2010. For a blog that costs $1.99, that doesn't quite cut it. However, it has only just been offered for the Kindle, so hopefully now they'll start updating it at least once a week, if not twice or more.

DOCTOR WHO hates my dad

Much has been made of the homosexual agenda that some people have suggested runs under the reinvention of the universe's favourite Time Lord under Russell T Davies, but there is a more insidious plot going on here - to undermine fathers. Call Fathers for Justice and have red powder thrown at the show's creators.

Rose's dad is a loser and a coward and, though he saves her in the end it's only after he's been shown time and again to let her down (see Father's Day)

'Are you my mummy?' asks the Empty Child, but he isn't asking for his daddy and why? Because the blighter's gone and done a runner.

The Idiot's Lantern features an abusive father, who is so bad he has to be sent packing in the end.

And I don't know why we have to 'Fear Her' in the episode of that name because it's the (again absent) father who turns out to be a monster to be feared.

Where is Donna's father? We see her mum and her Grandad, but her father? Nope, not a sign. Clearly another absentee pater.

Then there's 'The Doctor's Daughter' in which the Doctor gets a surrogate child and immediately disowns her and won't have anything to do with her. Good parenting image that one.

'The Next Doctor', well he just manages to forget that he has a son that needs rescuing. That's the kind of thing that slips the minds of all dads at one time of crisis or another.

But it's not just restricted to the main series either. In THE SARAH JANE ADVENTURES, Sarah is bringing up Luke without a dad (admittedly through a technicality) and Clyde's father is shown to be a right selfish git who is also absent. Maria and Rani both have non-absent fathers, but they are shown to be a bit rubbish and pompous.

And Captain Jack Harkness, what kind of a Dad is he, going around killing his own grandson in CHILDREN OF EARTH.

So, the next time that you want to go on about supposed gay subtexts in DOCTOR WHO spare a thought to the real victims of this show - fathers.