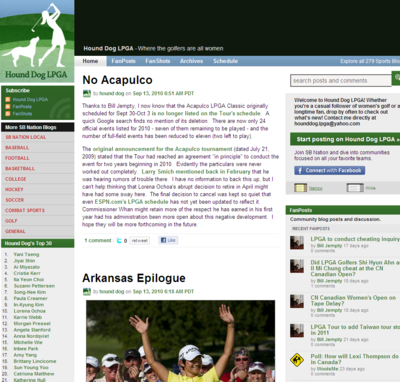 BLOG DESCRIPTION: Welcome to Hound Dog LPGA! Whether you're a casual follower of women's golf or a longtime fan, drop by often to check out what's new!

MY REVIEW: If you like womens' golf, this is the blog for you. All golf tournaments seem to be covered. (And since the season is winding down...not sure what will be the focus of the blog in the off season) But for now, go ahead and subscribe and check it out.

The news on tournament play isn't given in depth, most posts are three paragraphs long, about 250 words, but still, the highlights are hit. Check it out.

Thanks to Bill Jempty, I now know that the Acapulco LPGA Classic originally scheduled for Sept 30-Oct 3 is no longer listed on the Tour's schedule. A quick Google search finds no mention of its deletion. There are now only 24 official events listed for 2010 - seven of them remaining to be played - and the number of full-field events has been reduced to eleven (two left to play).

The original announcement for the Acapulco tournament (dated July 21, 2009) stated that the Tour had reached an agreement "in principle" to conduct the event for two years beginning in 2010. Evidently the particulars were never worked out completely. Larry Smich mentioned back in February that he was hearing rumors of trouble there. I have no information to back this up, but I can't help thinking that Lorena Ochoa's abrupt decision to retire in April might have had some sway here. The final decision to cancel was kept so quiet that even ESPN.com's LPGA schedule has not yet been updated to reflect it. Commissioner Whan might retain more of the respect he has earned in his first year had his administration been more open about this negative development. I hope they will be more forthcoming in the future.