The Boy Who Knew Too Much: A Child Prodigy (education) 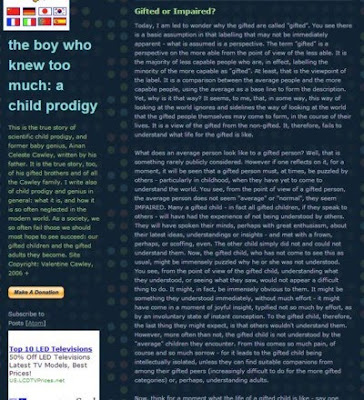 AMAZON SUBSCRIPTION LINK: The Boy Who Knew Too Much: A Child Prodigy

BLOG DESCRIPTION: This is a blog unlike any other on the net. A father, Valentine Cawley, writes of his well known scientific child prodigy son, Ainan Celeste Cawley, and family and tells of life as an expat in Asia.

Ainan spoke his first word at a couple of weeks old, crawled at four months, walked at six months, ran at eight months and read his first letter at eight months. At seven years old, he passed O level (the youngest in the world). At 8 years, he went to his first College for Chemistry. The blog takes an insightful look, at the life and world of a unique child prodigy and his family.

Ainan's story was covered on the front page of the Wall Street Journal, and in hundreds of other major newspapers around the world.

How do they deal with life, being thought of as "gifted" by their peers, while to them, they are normal, and everyone else is handicapped. (This was the musing of the author's post for today, and it makes a lot of sense. Surely that is how a "gifted" child must feel - and then, you have to wonder, as they grow up, always being the youngest but smartest person in the room, how do they cope with their experiences, given how the rest of society treats those who are exceptional. (If you're an athlete, you are heaped with praise and can show off your physical skills all you like, if you're a scholar, you're ridiculed, laughed at, and even beaten up for "thinking that you're better than everyone else.")

I found this blog a fascinating read, and I recommend it for everyone who has gifted children, extremely intelligent children, or just children in general.

Fintan, seven, is, as I have noted, before, a boy who surprises. He has a disarming manner which lulls one into a sense that all is to be as expected - and then he pounces with one of his characteristic unpredictabilities. If an "unpredictability" can be characteristic, of course.

Today, he bested me, twice, in conversation.

I was discussing reading with him. "Reading is the most important skill in life.", I opined, seriously.

"Reading?", he doubted, openly, "Not walking?", he continued, with one of his little smiles that says so much with so little.

He had me there. I imagined then, a life of utter immobility and compared it to a life of illiteracy. He was right: immobility was worse than illiteracy. The former quite deprived one of a rich life - the latter, however, might not affect one, anywhere near as drastically, if one's choices were carefully made.

He had won, without even trying. I just nodded, a little, in acknowledgement of his point.

Fintan looked at me, his eyes sparkling, with amusement at what was to come. "You don't want to buy a dog, you should rent one."

Again, he had a point, for we are very unlikely to live in Malaysia for the length of a dog's life: what would we do then, when the time came to leave? He had identified the essential problem with my proposal - and proposed his own slightly whimsical solution.

I like the way he challenges my assumptions, points them out to me and punctures them. He does it so casually, as if, perhaps, it were an automatic reflex with him. I think it is, actually. I think he sees the problem with what is said to him, the moment it is said. He sees the cracks in things - the flaw that should be highlighted for a better understanding of the situation. It is a useful way to think, particularly if developed, as he grows up. It should allow him to avoid many a problem and to act, I should hope, with a certain care and wisdom.

In the meantime, I will continue to enjoy being defeated by my son's ripostes. It makes me smile, to hear him so.

RECENT POSTS:
--Gifted or Impaired?
--Fintan's deft rejoinders.
--How long is my blog?
--Publishing my blog on Kindle, Amazon.
--Don't be shy.