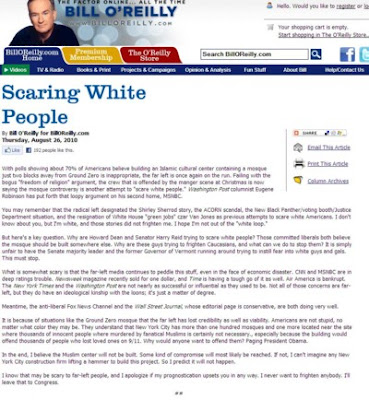 BLOG DESCRIPTION: Bill O'Reilly's weekly column. Get access to it days before it is published in the newspapers

MY REVIEW: Conservative news talkers tend to get lumped together, but they are not all universally liked. Some Hannity fans don't like O'Reilly, Savage doesn't seem to like anybody, etc.

I enjoy reading O'Reilly's columns, even if I don't always agree with him. Of course the columns are well written and he sets out his arguments clearly.

You receive one column a week, but when you subscribe you've got 25 pages of article to read (with 4 titles on each page.)

There is something wrong with the formatting, you see the html code (<"br"> for line break, <"em"> for italic, and so on, but it's easy to ignore.

With polls showing about 70% of Americans believe building an Islamic cultural center containing a mosque just two blocks away from Ground Zero is inappropriate, the far left is once again on the run. Failing with the bogus "freedom of religion" argument, the crew that is offended by the manger scene at Christmas is now saying the mosque controversy is another attempt to "scare white people." Washington Post columnist Eugene Robinson has put forth that loopy argument on his second home, MSNBC.

You may remember that the radical left designated the Shirley Sherrod story, the ACORN scandal, the New Black Panther/voting booth/Justice Department situation, and the resignation of White House "green jobs" czar Van Jones as previous attempts to scare white Americans. I don't know about you, but I'm white, and those stories did not frighten me. I hope I'm not out of the "white loop."

But here's a key question. Why are Howard Dean and Senator Harry Reid trying to scare white people? Those committed liberals both believe the mosque should be built somewhere else. Why are these guys trying to frighten Caucasians, and what can we do to stop them? It is simply unfair to have the Senate majority leader and the former Governor of Vermont running around trying to instill fear into white guys and gals. This must stop.

What is somewhat scary is that the far-left media continues to peddle this stuff, even in the face of economic disaster. CNN and MSNBC are in deep ratings trouble. Newsweek magazine recently sold for one dollar, and Time is having a tough go of it as well. Air America is bankrupt. The New York Times and the Washington Post are not nearly as successful or influential as they used to be. Not all of those concerns are far-left, but they do have an ideological kinship with the loons; it's just a matter of degree.

Meantime, the anti-liberal Fox News Channel and the Wall Street Journal, whose editorial page is conservative, are both doing very well.

It is because of situations like the Ground Zero mosque that the far left has lost credibility as well as viability. Americans are not stupid, no matter what color they may be. They understand that New York City has more than one hundred mosques and one more located near the site where thousands of innocent people where murdered by fanatical Muslims is certainly not necessary., especially because the building would offend thousands of people who lost loved ones on 9/11. Why would anyone want to offend them? Paging President Obama.

In the end, I believe the Muslim center will not be built. Some kind of compromise will most likely be reached. If not, I can't imagine any New York City construction firm lifting a hammer to build this project. So I predict it will not happen.

I know that may be scary to far-left people, and I apologize if my prognostication upsets you in any way. I never want to frighten anybody. I'll leave that to Congress.