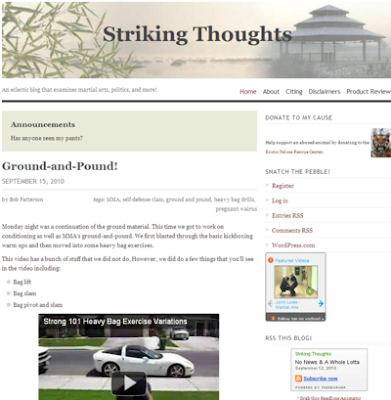 I'm a past black belt in Tae Kwon Do and I've also studied a style of Northern Long Fist kung fu and YMAA-style Chin Na. I also have some experience in American boxing and PPCT, a self-defense system for security personnel. I'm currently studying aikido.

MY REVIEW: I've dabbled in martial arts for most of my life, with dabbled being the operative word, unfortunately. But as such, I am familiar with the styles that the author of this blog refers to, in his quest for knowledge.

Frankly, I highly recommend this blog. Everyone should study a martial art - see what this author has to say about his journey, and you might be inspired to do so.

My self-defense class meets Mondays, Wednesdays, and Saturdays. Given my schedule there is no way I can devote time to Saturdays. I mention this because it means I miss out on some practice. The good news is that there are a few other folks who only attend once or twice a week. Some have busy schedules like me, while at least two others are practicing black belts in other martial arts schools (one in Aikido and one in Taekwondo).

This week I was able to sneak in for the Saturday class. Since there is no class on Monday due to Labor Day, I thought I should make an exception. Saturday we got to work on more ground basics. No sprawl drills this time! We got to practice two simple take downs, the mount, and four locks from the mount.

Royce Gracie I am not.

Teacher said the BJJ techniques he picked for this course were selected with these things in mind:

Simple to execute and easy to remember under stress (was hoping he’d say gross motor skills but he did not)
Fits into his simple philosophy: Neutralize or escape.
Concerning point two, in all of the classes thus far he mentions this. We are not learning this stuff for competition — as he famously repeats, “I have a class for that if you want to take it!”

His notion of neutralize is basically stopping the threat. It is the execution of some technique that stops the threat long enough so you can escape. Examples range from a flurry of punches and kicks, to various locks, or even simple submissions. Of course, if you cannot neutralize, you maybe can escape long enough to get back into a safe fighting stance and try again.

Anyhow, back to class! We started out with two simple take downs. It sounds like these will be the bread and butter moves from basic to intermediate so I had better get used to them. The first was the single leg take down and the second was the double leg take down. Both pretty basic and both techniques that any high school wrestle knows.

We did a lot of entries, take downs, and “mounting” practice. Given my height and long legs, I’m not liking the idea of shooting in for a leg. It’s just too slow for my physiology, hard on my lower back, and also seems to open me up for a choke if I botch it. I’ll go through the motions because I have to, still, were this “go time” I can tell you that this is not how I’d prefer to get someone on the ground! (Side note here but I know one throw from Taekwondo and one from Kung Fu/Chin Na that works just as well.)

The only technique that I liked was catching someone’s kick and taking that into a single leg take down. In fact, we had at least two version of that in Taekwondo so I’m pretty familiar with it. The only difference is that in this course the goal is to mount the attacker. In TKD we just punched them in the “Jimmy” while they were prone.

After we were good and tired from the take downs and also from taking turns as the crash test dummy, we moved into the submission holds. Here they are in no particular order:

Straight arm bar
Key lock
Total hold down
Shoulder lock
I’ve done the arm bar before — it’s been ages so this was good review. Everything else was new to me. The key lock I picked up fast. The last two are going to take a little more practice before I’m comfortable. Bear in mind this was all from a mostly static mount with a mostly willing partner. Later on things will get dynamic but for now he wants us to get good at all the technical basics. (basically Royce Gracie would have been bored to tears)

We were also cautioned only to go to the ground on the street under two circumstances. 1) If you are taken there against your will and 2) If, after your “situation assessment”, you think it’s a safe bet. To illustrate point two Teacher had Tatoo mount a willing victim. While Tatoo mounted Teacher simulated kicking Tatoo in the head.

It was a good point and judging by a few of the expressions I saw, obviously a new point for some!

These holds definitely rely on gross motor skills.
In Chin Na we would spend weeks and months learning locks that relied on fine motor skills, coordination, and dexterity. Sometimes it took three or four classes before I could halfway execute.
These came fast and by the end of the class I could do them all, while a few of the newbies will need more practice. Hat-tip Chin Na!
We were told to take the hold until the defender tapped.
On point four, I just had to ask…

Me: “So if I’m using this in a street setting, how do I know the person is sincere in their tap? What if they get back up after I make them tap and proceed to clean my clock?”

Teacher: “You don’t know if they are sincere — it’s a judgment call that you all will have to make.”

Then Teacher used me as the test dummy to further make his point. From Mr. Keylock Teacher showed that you had options. One would be to destroy their shoulder and escape. Another would be to use the pain from the hold as a distraction, rain elbows or punches, and then escape. Or, if they do give up, you can hope you scared them bad enough that they will stop attacking.

All-in-all a good class. I’m sore in new places and have much to ponder!