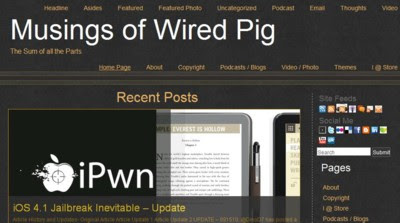 BLOG DESCRIPTION: The personal and eclectic blog of Wired Pig, a retired cop and technophile residing in the Pacific North West.

MY REVIEW: An interesting blog. No real theme...the author is a retired police officer but he doesn't really discuss law and order. Most of his stuff seems to be about computer technology.

The caveat is that there's lots of videos, and links, so give it a try with your two-week free subscription, to see if its something that interests you.
Sample post

BEAVERTON, Ore. — The City of Beaverton has expanded the scope of a celebration that started out as a party for Mexico’s Independence Day.

The city on Friday announced they were broadening the festival to recognize National Hispanic Heritage Month for the “Year of the Bicentennial” in the Americas as Argentina, Chile, Colombia, and Mexico all marking 200 years of independence over the month.

It was scheduled for September 16 at 6 p.m. at Beaverton’s City Park.

According to the U.S. Census, Beaverton is the most diverse city in the state. Twenty percent is “non-white,” 16 percent is classified as Hispanic. Larson argued that fact did not necessarily mean of Mexican descent.

A request for the event was taken from the Mexican consulate, Bode said. Bode said the aim of the celebration was to allow people of Mexican heritage into closer ties with the community at large.

Beaverton’s Mayor Denny Doyle was set to speak at the event, along with performances by a Mexican folk ballet, maricachi bands and food. The cost to put on the event was $6,000 The festival is free to attend.

But critics call it ridiculous, when the city doesn’t even have a taxpayer-funded Fourth of July Celebration.