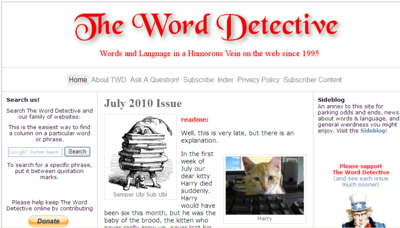 On the web since 1995, The Word Detective also offers a free searchable online archive of thousands of past columns.

The Word Detective is published monthly.

MY REVIEW: This website is excellent - you need to visit it directly to search for and "find a column on a particular word or phrase."

The blog is a "sideblog," updated only once or twice a week. If you're interested in the English language, you'll enjoy it.

The BP spill has poisoned our tongues … our poor, crisp, British tongues
Charlie Brooker in the Guardian:

Flippantly putting the grave environmental tragedy of it all to one side for a moment, the Deepwater Horizon oil leak isn’t just causing extensive damage to the Louisiana coastline. What about our accents? Our lovely British accents? Thanks to the BP link, they’ve been destroyed too. Don’t know about you, but whenever I’m around Americans, I tend to exaggerate my Britishness in a pathetic bid to win their approval. Those days are gone.

The first time I visited the US, I ran into trouble at immigration. Half the group I was travelling with decided to get drunk on the plane, which probably would’ve been fine with all the other passengers if it hadn’t been for the unrelenting cackling and yelping and removal of trousers. I was fairly drunk too, incidentally, but only because I was so terrified of flying I’d decided to blot out the whole of reality by glugging myself into an inflight coma. From my slumbering perspective the flight was a warm 15-minute snooze. To the other passengers it must’ve felt like a 30-year sentence in baboon prison.

Upon arrival, we were identified as troublemakers and hauled off one-by-one for a comprehensive bothering. Instantly I realised my only hope of avoiding instant deportation was to behave like a minor royal – not an aloof, chilly posho, but a genial gosh-what-a-wonderful-country-you-have Hugh Grant-type, one who smiles a lot while using slightly formal language. I apologised profusely by saying, “I apologise profusely.” The officer started out prickly – one of his opening gambits was, “You could be spending the night in jail, wiseguy”, which simultaneously impressed and scared me – but several minutes of profuse apologies and crikey-I’m-sorry delivered in an embellished British accent appeared to disarm him, and I was released without being subjected to gunfire.