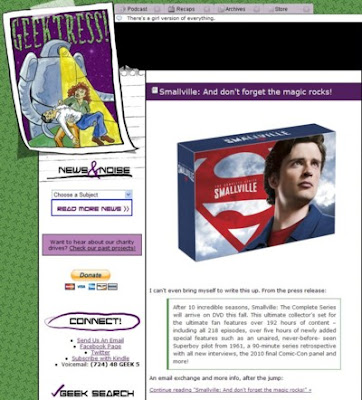 MY REVIEW: If you're a science fiction or fantasy fan, man or woman, I urge you to subscribe to this blog. The author writes well and with entusiasm, and covres a variety of media - TV, books, movies. THere's recaps and reviews of TV series and comics...just about everything. Check it out.

Game of Thrones Read-Along, Week 1
(It's a long post, I share only a few paragrpahs. It is also illustrated with photos from the TV series. Check it out online)
In Shakespeare’s tragedies, there’s always this major turning point where someone has killed someone else and then events have to play themselves out, usually with everyone dead at the end. The turning point of A Game of Thrones happens before the book even starts. Jon Arryn, Hand of the King, dies, and as Eddard Stark comes to find out, his death was really murder.

The first 200 pages of A Game of Thrones sets this murder theory up. We also get a lot of introductions and character development in these pages. A lot of what happens in these first pages shape the characters into who they become several books down the line.

Lots of plot threads start here. Members of the Night’s Watch encounter White Walkers – ghostly zombie type creatures bent on murder and destruction. Eddard Stark learns of Jon Arryn’s death and King Robert comes to Winterfell to ask him to take the dead man’s place as Hand of the King. Jon Snow, Eddard’s bastard son joins the Night Watch on the wall and Tyrion Lannister, dwarf and brother to Queen Cersei accompanies him. We also meet Daenerys Targaryan, the last Princess of the Dragon as her brother sells her into marriage with Khal Drogo, a barbarian horse lord.

There is tons of back story that goes along with these events, that make these events more than simple plot points. The most important bit of back story involves Robert’s Rebellion. We learn that 17 years ago, Robert usurps the throne from Mad King Aerys II – Daenerys’ father. Robert also murders Rhaegar, King Aerys’ heir and Daenerys’ oldest brother, for kidnapping his betrothed and raping her a million times, which eventually results in her death. Robert’s betrothed is Lyanna Stark – Eddard Stark’s sister. So, Robert, Eddard, and Jon Arryn storm The Trident and take down the mad king. King Aerys II had also done a whole lot of other awful things, including murder Eddard Stark’s father and older brother and a bunch of other people just because he felt like it. Robert murders Rhaegar and his wife and their newborn baby. King Aerys’ queen manages to escape with her younger son Viserys and Daenerys, who is still in the womb. Robert becomes King and everyone lives not so happily ever after.

The horror of those events drive most of our characters throughout the series. Maybe Robert’s Rebellion was the turning point. Robert disrupted several generations of crazy inbred Targaryan rule. Perhaps the universe is not happy with this. Aerys was a psychopath, but he was the trueborn Targaryan heir. This might sound silly, but in many real life cultures, a king is god’s own avatar on earth. Kill that avatar and all hell breaks loose.

Anyway… Martin gives us eight different character perspectives in this first book and we get all eight of them in the first 200 pages. In my mind, the most prominent POV is that of Eddard (Ned) Stark. Out of all the batshit crazy characters you will meet in this series, Eddard stands out as a rock of reason. He can be harsh at times but is also compassionate when he needs to be. He loves his wife and children and is a hard but fair Warden of the North. Ned is an Everyman. He is the easiest to relate to even though sometimes his noble actions make you want to do a facepalm because you know they’ll bite him in the ass later. Ned is too trusting and too willing to think everyone else is like him – putting honor and duty above personal gain.

Part of what makes Ned such a likeable character is that we also see him from the POV of several of his children – Jon, Sansa, Arya, and Bran. They all love and respect him. Through his children we see that he is a good father as well as a good Warden. We also see Ned through is wife Catelyn’s eyes. Catelyn had been betrothed to Ned’s older brother Brandon before he was murdered by Aerys. As honor and duty demanded, Ned took his brother’s place and married his brother’s bride. Catelyn came to love Ned over the years and she is devoted to him, giving him five children and hoping for more. Through Catelyn, we see that Ned is also a good husband.

I have one note on Catelyn as a character. I don’t like her. Everything she does throughout the series is forever colored by her interaction with Jon – Ned’s bastard – in Bran’s sick room. In a major plot point, where we see for the first time that no character is safe from death or destruction, Jaime Lannister shoves Bran out a multistory window after the boy witnesses him and his twin sister, Queen Cersei, having their affair.

(Continued at the blog)

RECENT POSTS:
--Smallville: And don't forget the magic rocks!
--GoT Read-along, Week 2
--I like big links and I can not lie
--Next Quarter's Shirtless Beheadings Flick Looks Good
--Wish List Wednesday: The Galaxy Far Away Edition
--Battle Bands: Squishy And Bossy
--Game Of Thrones Read-Along: Week 1