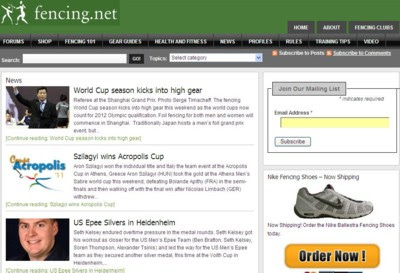 BLOG DESCRIPTION: Discover, Enjoy, and Progress in the Olympic sport of fencing with our up to date news and training tips columns.

MY REVIEW: Every time a movie comes out with a lot of fencing - the first Pirates of the Caribbean, for example, or the first Star Wars, interest in fencing peaks briefly in the US. But because real fencing is not quite like its movie counterpart, the interest doesnt' last too long.

Which is a pity, because participants in fencing matches have fun, and its a great sport for increasing your fitness.

But it's an esoteric sport and I wonder how many Kindle readers are interested in fencing? Well...because you get a two week free subscription, why not subscribe and take a look at the blog, and indeed, at the sport itself.

Foil fencing for both men and women will commence in Shanghai. Traditionally Japan hosts a men’s foil grand prix event, but the event was moved to Shanghai following the earthquake and tsunami that hit Fukushima. (You can still donate to the relief efforts through the Red Cross.)

Here’s a brief rundown of the events:

The Women’s Epee team heads down to 2016 Olympic host city Rio to take part in a “home zone” event. 12 athletes from the USA will compete in the individual event and the team event will feature some of our most seasoned athletes as the Hurley sisters (Kelley and Courtney), Maya Lawrence, and Lindsay Campbell will be the Team USA entry in the team event.