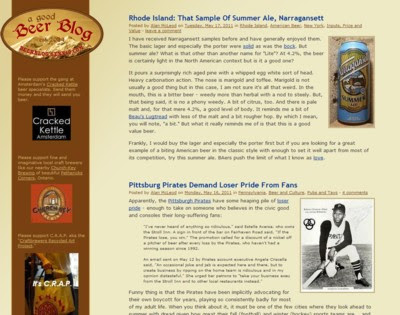 BLOG DESCRIPTION: The most popular beer blog on the planet (which must also make #1 in the universe), A Good Beer Blog has been slowing productivity levels since 2003... or so.

MY REVIEW: I have a lot of hobbies and a lot of interests...but beer isn't one of them. However, if beer - the different kindsin different countries, the brewings, the tastes, and everything else you can think of - is your cup of tea, then this blog is for you.

Canada's Dirty Secret: Buying Beer In Another Province
Posted by Alan McLeod on Friday, May 13, 2011 in Newfoundland, Canada, Quebec,
Beer and Law - 8 comments
Of all the reasons to call in the cops, buying beer in one province and taking to another has to be one of the most important, as this story shows:

"Our intelligence gathering revealed that we believe there was a large quantity of alcohol being brought in to the province from other provinces, and obviously that's a loss of revenue for the province," he said. In Fermont, a case of 24 bottles of beer costs about $29. In Labrador City, the same case is almost $45. The liquor corporation said it's working with the police on the problem. Royal Newfoundland Constabulary officers will patrol the highway to stop offenders. "Liquor or beer can be confiscated, as well as the vehicle," said Cst. Bill Fitzgerald.

Imagine being the cop detailed to confiscate a rural neighbour's vehicle over a 16 buck difference in the cost of beer. I have actually experienced this. When I lived in Canada's oddest province, Prince Edward Island, a pal visiting was stopped after crossing the bridge and his car got searched. After counting heads of passengers and beers, they were told to go on as they were fine. Police and government officials even ran ads about "smuggling" that mystified me before this event until I realized it was referring to shopping in another nearby part of the same country. Craziest of all, there is no mechanism by which you can pay at the "border" when you cross from one province to another.

This sort of thing makes me embarrassed to be Canadian.

RECENT POSTS:
-Rhode Island: That Sample of SUmmer Ale, Narragansett
-Pittsburg Pirates Demand Loser Pride From Fans
-Mr. Gillman on APA, SN PA, Liberty, Ballentines and Stuff
-Canada's Dirty Secret: Buying Beer in Another Province
-Heritage as Brand as Heritage as Foundation as Brand
-Where There is Beer there is Peace Revisted
-The US Secret Service needs Good Cellarpersons