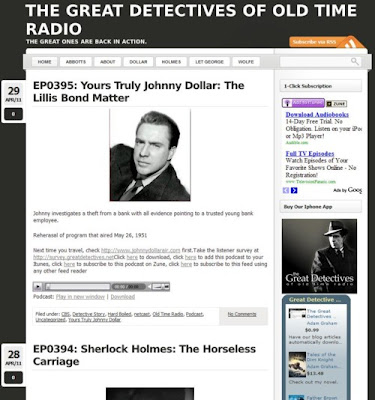 BLOG DESCRIPTION: Adam Graham brings you insights and commentary on vintage detective movies, and radio and television programs, with an occassional look at the broader world of vintage entertainment and old time radio.

While these articles are written as companion pieces to the Great Detectives of Old Time Radio podcast, it is not necessary to subscribe to the podcast to enjoy these fun and interesting articles.

MY REVIEW: I have long been a fan of old-time radio, and so I can't recommoend this blog heartily enough. There is a podcast on the blog, so you'll want to visit it on the web as well to listen to that.

The author of this blog gives the history of quite a few old time radio shows, and it's just a fun blog. Subscribe!

(A few other sites on the web to listen to old time radio:
Radiospirits.com
www.bbc.co.uk/radio4extra/
www.radio-showcase.com/

Many old time radio shows made their way to television. In the 21st Century, are we ready for one more?

Broadway's My Beat was one of the finest radio detective dramas and an underrated one at that. It aired from 1949-53, and again in the Summer of 1954. It was written by Mort Fine and David Friedkin. Friedkin and Fine went on to produce the 1960s TV hit, I Spy. Broadway's My Beat has remained little more than a forgotten gem in radio history.

Fast forward to 2010 and Gregory Friedkin (David's son) produced a pilot for a television adaptation of, Broadway's My Beat with the series transported from New York to Los Angeles, with references to "Broadway" rewritten as references to "The Boulevard," which is also the title of the new series, set in 1953. The episode was posted online, so I got a chance to take a peak.

The pilot episode that's been released has a very noirish feel to it as Danny Clover (played by Jon Jacobs) searches for the kidnapped wife of a bank teller before the case becomes a murder investigation.

The music helps to establish a fittingly haunting mood for the story and they manage to make most of the scenes look old enough to be in the 1950s. Jon Jacobs was far older than I imagined Clover to be. Larry Thor, who voiced Clover on the radio was 33-38 during the show's run. Jacobs appears to be in his 50s.

Jacobs, does however do a solid performance as Clover. His voice is perfect for the part. If anything, his age tends to add a bit of credibility to the world-weariness of Clover.

If the pilot has a weakness, it was the performance of some of the supporting actors. Michael Wayne James was too hammy in the role of the missing woman's husband. Give Friedkin and Jacobs a good cast and I think this could be a solid program.

Of course, whether it will make it remains an open question. If the writers keep to adapting Broadway's my Beat episodes, it will most likely end up a half hour TV-PG rated period cop show. They don't make them like that anymore. Still, over the years I've learned is that there's a demand for this type of program.

Of course, Friedkin may want to write new Danny Clover cases that could be stretched to an hour. It could be done with actual Broadway is My Beat episodes being mixed with originals. It could definitely work.

Whether Friedkin can a right network and get them to realize the potential for this show is an open question. Either way, I wish him well.