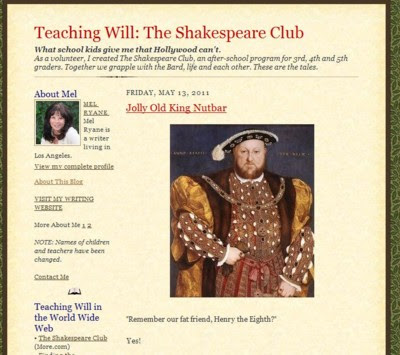 BLOG DESCRIPTION: As a volunteer, I created The Shakespeare Club, an after-school program for 3rd, 4th and 5th graders. Together we grapple with the Bard, life and each other. These are the tales.

MY REVIEW: I enjoyed this blog a great deal, and I heartily recommend it. If you're in to Shakespeare, in to theatre, or just trying to teach kids how to do anything, this blog will appeal.

The author is a professional writer, and her stories are funny, illuminating, and at times inspirational.

MIA
What do you want?"

I get a blank, brown-eyed look for an answer.

"Really, I'll give you anything you want....What do you want?"

This can be a startling question coming out of the blue. Especially coming from an adult and you're a fifth-grader.

Dominick and I are sitting alone at the back of the auditorium during lunch. I'd located him on the field, crooked my finger,walked away, and he'd followed.

I ushered Dominick into a seat and planted myself across the row. In the distance we could hear squeals and shouts of kids roughhousing, but inside the cavernous hall it was quiet. I didn't say anything. For a while Dominick didn't say anything, then:

"What?" He shrugged his shoulders.

"Right. That's my question. What?"

And that's when I offered him the world. Whatever you want, Dominick.

"You know what?" I cut him off. "We're not even going there because I know you went to baseball practice."

"Are you mad at me, Dominick?"

He said this with a world-weary shake of his head. It was an adult reaction. His face looked so exhausted he could only be sharing the truth.

I knew then whatever was going on with Dominick had nothing to do with me, or playing Oberon, or Shakespeare Club.

"Then no more missing. I don't care if you're throwing up, cut and bleeding. No more missing because you're letting down your team and you're wasting my time. Do not mess with me, Dominick. Do not."

He gave me serious nod.

From the time he was a baby, Dominick was moved home to home, house to house, pretend-family to pretend-family over and over again in the foster-care system.

He and his little sister have been adopted and are now in a stable situation, but the family is about to relocate to another city and it looks like Dominick might be having a reaction. He wants to run.