The Playgoer (arts and entertainment, theatre) 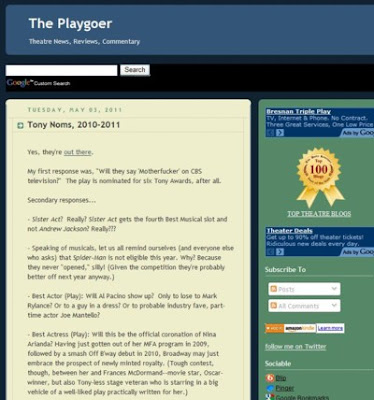 BLOG DESCRIPTION: Theater critic Garrett Eisler weighs in on all things dramaturgical, Broadway and beyond. Includes links to theater news stories from all over the web and the world.

MY REVIEW: I love the theatre, and if you do too, this is the blog for you. (Theater = movie theaters, theatre = the stage. That's how I differentiate 'em!)

Truth to tell, I find the stage our most tragic art. An actor - or a whole company - can give the performance of their lives one night...and only a handful of people will see it...and will they be able to remember anything (except the emotion of pleasure) about it ten years later?

I've seen many plays in my life - the Guthrie Theater season of 1985 is a particular favorite... and I'd give almost anything to be able to see those productions again - but of course that's just not possible.

This blog has recently been focusing on theater awards - the Tonys and the Lortels, but there's plenty of theatre info and reviews here, so check it out.

Also, Artistic Director Kate Whoriskey (who was in the middle of her first season there) has officially resigned rather than wait out the uncertainty. Indeed, better than waiting around to be laid off after already having your paychecks stopped. Talk about adding insult to injury...

As an earlier commenter suggested, this may all have more to do with the local Seattle scene than the state of our nonprofit companies nationally. Still, I can't think of any other theatre as large (budget-wise) and as prominent (prestige-wise) going under in recent years. Can you?