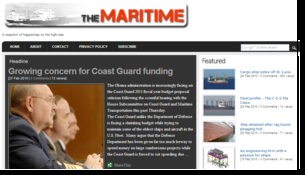 BLOG DESCRIPTION: The Maritime strives to bring readers interesting and valuable information from the maritime industry around the world.

MY REVIEW: I must say I find the pricing that Kindle does of people's blogs rather odd. They start you out at $1.99....and if you dont get any purchasers...your blog stays at $1.99. (Apparently.) If you do get purchasers who are willing to pay the $1.99 price...your blog goes down to 99 cents!

That's the only thing I can think of to explain the fact that this blog is still at$1.99 after having been available on Kindle since November 2009, without any subscriptions. (If a lack of a sales ranking means that there has been no subscriptions, which I'm assuming it does.)

I think this is a must-read blog.

And if you subscribe to it... don't worry. The price will likely go down. ; )

The Obama administration is increasingly facing on the Coast Guard 2011 fiscal year budget proposal criticism following the scornful hearing with the House Subcommittee on Coast Guard and Maritime Transportation this past Thursday.

Since the Coast Guard is also a regulatory agency for the maritime industry, mariners and those connected to the maritime industry have reason for concern over the proposed budget cuts. Constrained resources could effect everything from regulatory oversight, marine safety prevention activities, and search and rescue response. Many in the industry are watching this topic very closely.