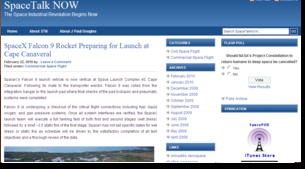 BLOG DESCRIPTION: A look at how commercial human space flight is outpacing NASA.

MY REVIEW: Oh, this is a must-have blog. It should be a companion piece to NASA Watch. In my opinion, if we can't get into space via government-run programs such as NASA, we've got to do it with civilian projects. Hopefully, long-term projects that will set out for the distant stars.

However, the posts here are more concerned with the actual fate of NASA and America's space program than anything else.

This is a must-read blog.

Astronautics giant Burt Rutan, whose name entered the household lexicon in the 80’s for designing and building Voyager, the first aircraft to fly around the world without refueling and most recently for the revolutionary SpaceShipOne and SpaceShipTwo, the first, private spacecraft, has made a statement regarding what he feels was a misrepresentation by the Wall Street Journal of comments he made concerning the fate of NASA’s Constellation program. Constellation is the agency’s program to return humans to the moon and go beyond. But the President has proposed in his FY2011 budget to cancel it.

Here is Dr. Rutan’s statement followed by his letter to Congressman Wolf.

Since the WSJ chose to cherry-pick and miss-quote my comments to Cong Wolf and since the blogs have taken that to further mischaracterized my comments, I am forwarding the Wolf memo in its entirety, in the hopes that some of this gets corrected. Some additional clarification of my thoughts follow:

My basic concern is that the real value of NASA’s contributions that America realized in the 60s and early 70s is now being completely discarded. How can we rationalize a surrender of our preeminence in human spaceflight? In my mind, the important NASA accomplishments are twofold: 1) The technical breakthroughs achieved by basic research (not by Development programs like Constellation) and 2) The Forefront Manned Exploration that provided the inspiration for our youth to plan careers in engineering/science and that established the U.S. as the world leader in technology.

In short, it is a good idea indeed for the commercial community to compete to re-supply the ISS and to bring about space access for the public to enjoy. I applaud the efforts of SpaceX, Virgin and Orbital in that regard and feel these activities should have been done at least two decades ago. However, I do not see the commercial companies taking Americans to Mars or to the moons of Saturn within my lifetime and I doubt if they will take the true Research risks (technical and financial) to fly new concepts that have low confidence of return on investment. Even NASA, regarded as our prime Research agency has not recently shown a willingness to fly true Research concepts.

For years I have stated that a NASA return-to-moon effort must include true Research content, i.e. testing new concepts needed to enable forefront Exploration beyond the moon. The current Ares/Orion does not do that. While I have been critical of Constellation for that reason, I do not think that NASA should ‘give up’ on manned spaceflight, just that they should be doing it while meeting the 1) or 2) criteria above.

Some have guessed that my recent comments are based on my overall displeasure with the Obama Administration. they are not; however it does seem that the best technical minds in U.S. industry are still striving to find HOW America can continue to be “exceptional”, while the Administration does not want America to BE “exceptional”.


And now in its entirety, here is the letter from Dr. Rutan to Congressman Wolf.

I occasionally banter with my friend, Mike Griffin on subjects that include golf, the AGW scare and NASA policy. After sending him my latest tirade, he shared with me his recent letter to you regarding taxpayer-funded space research. I promised him that I would send you my thoughts on the debate, which follow:

From my past comments on NASA’s post-mid-70s manned space efficiencies/accomplishments, an observer might think that I would applaud a decision to turn this important responsibility over to commercial developers. However, he would be wrong.

No question, it would be good to see commercial companies quickly succeed at orbital access and to take that capability beyond low earth orbit. However, I am fearful that the commercial guys will fail; i.e. they will do little more in my remaining lifetime than NASA accomplished in 3.5 years with Gemini in the mid 1960s. That would be a very big
mistake for America to make, as we move into an era of real competition in space exploration as well as risk the loss of our leadership in nearly every other technical discipline.

Mike Griffin’s excellent statement says it best; “I too want, in the strongest possible terms, to have government policies which serve to stimulate private development of space. But at the same time, I too am reluctant — with an analogy to instrument flying — to give up an airport where I know I can get in on the approach, for one where I might”.

What I would like to see is a decade or two of overlap – an initial push in the commercial arena of manned spaceflight (Development programs, not Research programs), while NASA flies risky new ideas (read, true Research programs, giving at least a chance of discovering an important new Breakthrough), and at the same time pushes the forefront of Exploration beyond the earth’s moon.

Imagine how much better America could motivate our youth if we were spending the billions of Stimulus Package money on making real progressin our efforts to someday colonize off the planet.

Two years after Neil and Buzz landed on the moon, America led the world in awarding PhDs in science/engineering/math. Today we are not even on the first or second page and most of our University’s technical graduates take their skills back to their own countries to compete with us. The motivation of our youth is the most important thing we do for our nation’s long-term security and prosperity. NASA’s role in that can be as critical as it was in the 60s if the taxpayers fund true Research and Exploration.

The attachment is a photo I took at the Shuttle STS-130 launch - Caption: “Reaction when told about the President’s NASA directive to abandon manned spaceflight”.

As always, I am ok with the distribution of my thoughts without limitation.

While I usually offer candid remarks at the drop of the hat, I am not interested in Congressional testimony, since under duress I occasionally have been known to blurt out the truth. I have no interest in being in the same room with John Holdren….. Taking a line from a very old play: ”I must turn away, least I soil my hands with the blood of a fool”