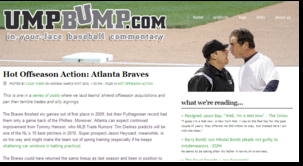 MY REVIEW: I am so sick of "in-your-face" commentary. How about a little informed but well-mannered commentary? But I guess that's what young males like these days (and heck, considering what I read on women's college basketball boards, young women, too.) Write your posts in a a condescending way, and this will make you appear witty.

So, because of the way the posts are couched, I really can't give this a thumbs-up. But since this type of "witty" writing seems to be appreciated these days, if you like that, you'll like this.

This is one in a series of posts where we laud teams’ shrewd offseason acquisitions and pan their terrible trades and silly signings.

The Braves finished six games out of first place in 2009, but their Pythagorean record had them only a game back of the Phillies. Moreover, Atlanta can expect continued improvement from Tommy Hanson, who MLB Trade Rumors’ Tim Dierkes predicts will be one of the NL’s 10 best pitchers in 2010. Super prospect Jason Heyward, meanwhile, is on his way and might make the team out of spring training (especially if he keeps shattering car windows in batting practice).

The Braves could have returned the same lineup as last season and been in position to make a playoff run.

Instead, they traded their best pitcher in a cost-cutting move.

The Braves sent Javier Vazquez to the Yankees for Melky Cabrera and two minor leaguers. Fangraphs’ Dave Cameron said the Braves got more for Vazquez than the Phils got for Cliff Lee. Tim Hudson says the Braves’ rotation will still be strong, even without Vazquez. But will it be strong enough? Atlanta’s staff will boast Hudson (who the team signed to a new contract this offseason), Jair Jurrjens, Derek Lowe, Tommy Hanson and Kenshin Kawakami, who is better suited to a relief role. It’s a good group, and could be great depending on how Hudson does in his first full season back from Tommy John surgery, and how young guns Hanson and Jurrjens progress. But the Braves’s staff could have been lights out if only ownership had been willing to spend a little more on Vazquez.

Elsewhere on the diamond, Atlanta signed Troy Glaus to play first base, a position at which he has played in only six games in his career. If Glaus is healthy, the signing could be a real coup, as the slugger is a regular threat to hit 30 home runs. But Glaus missed all but 14 games last season with St. Louis, after having arthroscopic shoulder surgery and experiencing a setback when he tried to make it back in time for opening day. Signing a first baseman to a one-year deal made sense, since the Braves expect prospect Freddie Freeman to be ready as early as 2011. But it’s a little surprising that a team that already boasts one oft-injured corner infielder (Chipper, we’re looking at you) would want to add another.

The Braves also signed the tatted up Eric Hinske, who’s played in the World Series three years in a row with three different teams. Hinske’s not good enough to play everyday, nor is he an ideal platoon partner for Matt Diaz, since both hit lefties better than righties.

So how does Hinske fit in? In an ideal world, Hinske will spend most of his time on the bench, pinch hitting and providing outfield and first base depth. But that’s only possible if Heyward makes the team out of spring training. Then Cabrera and Diaz can platoon in left.

Atlanta also tinkered with its bullpen this offseason, letting Mike Gonzalez walk and trading Rafael Soriano (who surprised the team by accepting salary arbitration). GM Frank Wren signed Billy Wagner and Takashi Saito to replace them, two old guys who are looking to prove they’ve still got what it takes.

Atlanta took a big step back by dealing Vazquez, who was worth more than 6 games above replacement last season. To make up the difference, the Braves will be betting on solid health from Jones, Wagner, Saito and Glaus, and a return to form from Lowe. And that’s a lot to hope for. If only the team had found the cash to keep Vazquez. If only.