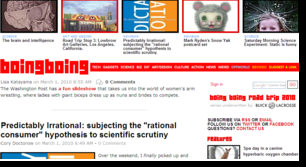 BLOG DESCRIPTION: Touted as "A Directory of Wonderful Things," Boing Boing informs readers about everything from new technological gadgets to privacy advocacy and civil liberty issues. With its five contributing columnists--Cory, David, Xeni, John, and Mark--Boing Boing offers information to enlighten, entertain, and change world views. Boing Boing has won the Bloggie award twice for "Weblog of the Year."

MY REVIEW: A very popular blog via the Kindle, if its sales ranking is to be believed. It also cost $1.99 a month instead of the more usual 99 cents, to subscribe, and I'm not sure if it's that valuable!

Although the blog does cover interesting material in a wide variety of subjects, it is link heavy. 90% of its posts are the kind where you have to click on a link to read the complete article. Well, since you get a free two-week tryout when you subscribe via the Kindle, check it out for yourself and see if that irritates you beyond all reason. (It would me.)

Some sample paragraphs (from a review of a book I suggest everybody read!)

Over the weekend, I finally picked up and read Dan Ariely's Predictably Irrational: The Hidden Forces That Shape Our Decisions, an accessible intro to the subject of behavioral economics -- that is, the study of how people behave in the real world and why that varies from the predictions made by classical economic theory (which predicts that people behave rationally and in their own interests). This is a subject I've been very interested in for some years and I'd read and blogged a lot of material about Ariely's work, but somehow never got 'round to reading it for myself.

I'm very glad I did! Ariely's a very engaging writer and a smart social scientist with a knack for illustrating his hypotheses about human behavior through elegant and simple experiments. There's no better time than now to read Predictably Irrational, as Ariely's theories about cheating, incentives, self-fulfilling prophecy, self control, and how we value the things we own versus the things we desire go a long way to explaining the econopocalypse, and also provide an excellent framework for analyzing proposals to get the economy moving again.

The results are fascinating, and point to the idea that we work hard for money, and we work hard for social reasons, but that one can short-circuit the other, and lastingly so. He then goes on to explain how companies that ask their employees to work harder for social reasons ("you're part of the team") but dismiss the employees for economic reasons ("we need to cut costs") end up in an impossible place. So do companies that ask customers to come make a purchase as a social transaction ("join the family!") but then treat the transaction after the fact as a purely economic matter ("you should have read the fine-print").

Every chapter works in this vein, and taken as a whole, Predictably Irrational presents a fatal blow to the idea that we can run a system on the assumption that people will take courses of action based on rational calculus, unclouded by cognitive blind-spots that make it practically impossible to find the best course of action.

Of course, this is already an accepted reality of the business-world -- it's why, for example, companies worry that an overly discounted price will reset consumer sentiment about the value of their product. It's why advertisers run "lifestyle" ads that don't feature the product or enumerate its benefits. It's why there are introductory offers that increase in price thereafter. All of these are designed to appeal to emotion, not rational calculus.

But in economics, this irrationality is treated like quantum physics: sure, it's true that this happens on the subatomic scale, but the whole system behaves in a rational, Newtonian fashion and can be treated as such. As Ariely persuasively argues, the economic world is full of a lot more weird, irrational quantum effects than we assume.

RECENT ARTICLES:
-Predictably irrational: subjecting the "rational consumer" hypothesis to scientific scrutiny [this is an excellent review of an excellent book, by the way, and I encourage everyone to read it, regardless of whether or not you subscribe to this blog.)
-Worst fries in America
-The Long Goodbye (guest blogger says au revoir)
-Tim And Eric's New season premieres tonight
-North Korea's woman traffic cops and the robotic mime they do
-Kid's gimbal-mounted cereal bowl