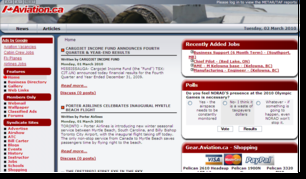 MY REVIEW: I enjoyed this blog, and I think all aviation enthusiasts will, regardless of whether they are based in the US or not. It seems to be more about commercial aviation rather than general aviation, however, but frankly, anything that affects Canada will sooner or later affect US aviation as well, so its as well to keep up with commercial aviation there, as well as here.

This is another blog that is starting out at $1.99, but will go down in price as more and more people subscribe to it. (I repeat again, Kindle sure has a weird way of pricing blogs!)

OTTAWA - "It's unacceptable that air travelers be asked to foot the bill for national security." This is how John McKenna, President and CEO of the Air Transport Association of Canada (ATAC) reacted to yesterday's announcement by Transport Minister John Baird on the increase in the Air Travelers' Security Charge (ATSC).

The ATSC was a tax levied in late 2001 to fund the newly created Canadian Air Transport Security Authority. This tax was imposed on passengers departing from any one of the 89 designated airports in Canada. The increases announced amount to greater than 50% increases in the ATSC. The security charge for a round trip domestic flight was $9.80 and will jump to $14.96, or a 53% increase. The ATSC for one-way transborder flights (flights to the continental US) will go from $8.34 to $12.71 (or $25.42 for a round trip flight), a 52% increase, and the charge for an international flight will go from $17.00 to $25.91, a 52% increase. "This is totally unacceptable, especially at a time when the air transport industry and its consumers are still struggling with the sluggish economy," declared Mr. McKenna.

According to a study conducted in 2008 by ATAC, Canada's ATSC was already the second highest in the world, only the Netherlands had higher security charges. "We are seriously beginning to doubt the efficiency of the Canadian Air Transport Security Authority (CATSA) if it requires the highest security charge in the world in order to makes ends meet", continued Mr. McKenna.

ATAC opposes the fact that the travelling public is asked to pay for national security. "No other mode of transport is shouldered with national security costs, why should air transport be different? We don't know how much the government collects with the ATSC and we demand more transparency on how this money is used. "We are certainly very interested in the efficiency review of CATSA to be launched by the Government of Canada," concluded John McKenna.