Memoirs From Nam (the home front) 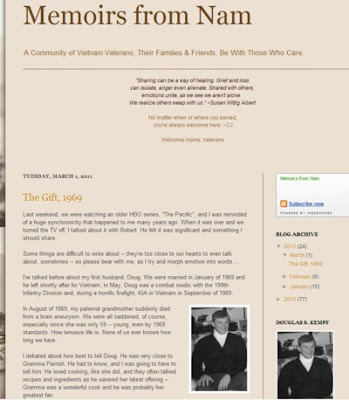 BLOG DESCRIPTION: The Vietnam War left a profound footprint on our country. As a Vietnam widow, it is my wish to provide a healing community where veterans can write about memories, families, and friends. They have the truths we are ready to hear. This blog is written in memory of my husband, Douglas S. Kempf, KIA Vietnam '69

MY REVIEW: This is a very meaningful, poignant blog,for anyone who lost loved ones in Viet Nam, or indeed any other armed conflict...or just via a senseless accident.

The only problem with the blog is that the author updates it infrequently. Only one post in March 2011 so far, 9 posts in February, 15 posts in January, and only 77 total for all of 2010. However, the blog's only 99 cents a month, so there's no reason not to check it out.

The Gift, 1969
Last weekend, we were watching an older HBO series, "The Pacific", and I was reminded of a huge synchronicity that happened to me many years ago. When it was over and we turned the TV off, I talked about it with Robert. He felt it was significant and something I should share.

Some things are difficult to write about -- they're too close to our hearts to even talk about, sometimes -- so please bear with me, as I try and morph emotion into words ...

I've talked before about my first husband, Doug. We were married in January of 1969 and he left shortly after for Vietnam, in May. Doug was a combat medic with the 199th Infantry Division and, during a horrific firefight, KIA in Vietnam in September of 1969.

In August of 1969, my paternal grandmother suddenly died from a brain aneurysm. We were all saddened, of course, especially since she was only 59 -- young, even by 1969 standards. How tenuous life is. None of us ever knows how long we have.

I debated about how best to tell Doug. He was very close to Gramma Parrish. He had to know, and I was going to have to tell him. He loved cooking, like she did, and they often talked recipes and ingredients as he savored her latest offering -- Gramma was a wonderful cook and he was probably her greatest fan.

As I was tearfully writing about Gramma, it occurred to me again just how precious every minute is with loved ones. I missed him so much. I would have given anything to be holding him and telling him in person about Gramma -- suddenly I wondered, what if something happened to me? Who would be the one to tell Doug? Who would console him? Then I knew. I would. As I sat there, a poem came out of nowhere -- it was an easy write, so unlike others I had written, and I went racing with it's simple emotion and insight.

If Only a Minute
(Written August 1969)
Sweet heart, if I only have a minute
to say goodbye to you,
let me whisper what I’m thinking
when my time on earth is through.

I'll tell you how I’ve loved you
and how happy I have been,
please, don't think of me as leaving,
for I know we’ll meet again.

We'll hold each other close once more
and I'll kiss away your tears.
We'll talk of precious things we’ve shared
through all our loving years.

When my time with you has ended
and He calls for me to come,
Just know, I’ve always loved you.
Please take care of everyone.

When I finished, I folded the poem with the letter, addressed the envelope, licked the stamp and like so many other letters, I kissed it and dropped it into the mailbox to find its way to Doug. Even now, as I look back, I'm amazed that I was so blind to the fact that Doug could be the one who died. I was so sure he would return, I refused to even think about any other outcome.

Months later, after his funeral, I received a large envelope from the Army. Inside was a small package of unopened letters that had never reached Doug and they'd never been read. Among the letters was the one I had written about Gramma's passing. Oh my God, I thought, he never knew ... and then the poem slipped down to the floor.

As I bent down and picked up the page, I began to read and I sobbed. The words took on a whole new meaning -- as though Doug had written the words to me, and I felt somehow comforted. I didn't know then that it was called a synchronicity, but I do remember feeling that it came from a higher power, something wonderful, yet mysterious. This was a gift, a magical message, to me from Doug.

... and I'm glad Gramma was there to Welcome Doug Home.