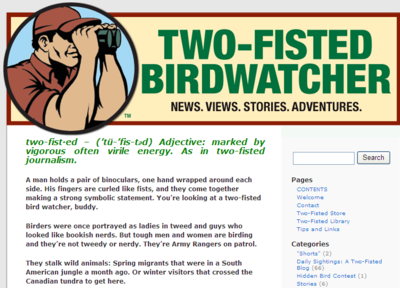 MY REVIEW: I have often regretted that I never spent any time as a kid learning the names of birds, and the sounds of their calls. Oh - I know the easy ones, of course, the robin, the cardinal, blue jay (their names, not their calls!) but no more than that. Now that I ride my bike everywhere, I - very occasionally - see a new bird, which I can never identify.

So I found the two-fisted birdwatcher quite enjoyable. Fun stories, well-written, with a sense of humor. Written by a guy trying to break the stereotype of birdwatchers as nerdy men and myopic ladies. (And it is a stereotype, by the way!)

There are a few photos. Not as many as I would have expected, but a few. They are of good quality, so even though they are in greyscale andyou can't appreciate the colors, you still get much of the impact of the pictures.

The Chicago Sun Times reported yesterday that cougars are moving into the Chicago area. This could make bird watching a bit more exciting. It could make the places that we’ve been calling wilderness into something better: Real wilderness.

Modern day mountain man and author Doug Peacock is said to have said, “It ain’t wilderness unless there’s something in it that can eat you.”

Well, if we get cougars, our wilderness gets more interesting. And I know the feeling. I hiked mountain trails in Colorado and saw warning signs about mountain lions. The signs were confusing. They said contradictory things like, “don’t threaten,” and at the same time, “wave your arms and look big.”

And I saw a Clark’s Nutcracker, Gray Jays, Black-billed Magpies, a Golden Eagle far above it all; a Western Tanager that posed for a pretty good picture, Mountain Bluebirds. And others. The birding was good. And there was that buzz throughout. Two-fisted bird watching.

So if cougars are spreading into our area, I say, okay. And I’m not surprised. A year or so ago, there was a big male cougar sighted by awe-struck citizens as he worked his way toward us from Wisconsin, then through Chicago’s north suburbs, and finally to the north side near Cubs Park in a busy neighborhood where cops gunned him down. You can see this on You Tube.

My theory is that the lion was heading to Lincoln Park Zoo, which isn’t far from where he was shot. This in-city zoo has open-air lion cages, and maybe the scent carried. Only a lion would know for sure.

So if cougars are coming in significant numbers to our area, well, let ‘em come. We’ve got enough deer to go around. And it’ll make bird watching in the forests and fields around here have a bit more of a buzz to it.

Just remember, wave your arms. No, that wasn’t it, look small. No that wasn’t it, look big. Ah, forget it. You’ll probably never see a cougar. But don’t let that stop you from looking for a Pileated Woodpecker, Bald Eagle or Summer Tanager. You really could see one of those.